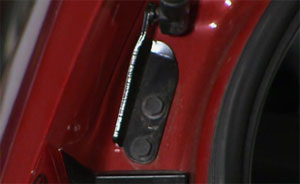 Gas charged struts: they’re in a lot of places on today’s cars. They may hold up the trunk or the hatch or the hood; maybe even other things on trucks and so on. But the big thing is that these do not last the life of the car in most cases. They’re gas charged; and over time the gas leaks out of them. That’s over a period of years. But that’s not a big deal. Because for most cars, you can go down to the local auto parts store, and by using the measurement from one end to the other, and the type of fastener, well you can buy a replacement set. And they’re relatively inexpensive. Now this applies to most cars. And what you wind up with, is in a matter of minutes and a few bucks, you’ve repaired the struts on your car. 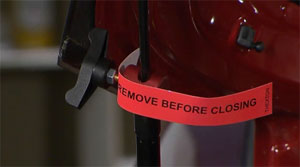 Now something that everybody should have if you work under the hood on a car that uses a strut to support it: and that is this little clamp that we get from Snap-on Tools. Clamps around the shaft of the strut, keeps it from coming down, and clunking you in the head.

Alright. Closing a hood, most people do it wrong. Seems like they want to get up here, and get a hand on either side of it, and just push mightily on it. Especially when it gets down close to being closed. That’s a wrong way to do it. What you’re supposed to do is, get it down about this height, then right in the center, with a couple of fingers…slam it. You see, this sounds aggressive, but actually it’s a lot better for the hood and for the car itself. Because when you get on it and lean on it, you’ll dent the hood right here where your hands are on it. Especially if the car has aluminum or high strength steel in the hood.

Another thing that’s changing on cars: right here. Wiper blades. Forever, they’ve been designed like this. Now the pressure is applied here by the arm. That pressure is transmitted to the blade at each one of these junctures. Those are pressure points.  And that means they don’t clean evenly. So the new design is right here: this is a beam type blade.  The spring is inside the rubber. So it gives even force all the way across the blade. Also if you live in an area where there’s snow and ice, well this doesn’t get clogged up with ice and snow built up between the pieces of it.  So you don’t have to buy winter wiper blades. So overall, this costs a bit more money, but it is a safety device. And isn’t it worth a little more money to have a safer car?