The arch enemy of every do-it-yourselfer is rust and corrosion on nuts and bolts and fasteners. And you know just about everybody does it the wrong way.

Say if you had this bolt over here, all rusted up like it is, how would you go about getting it loose? Well, the first thing you would do is not to put a wrench on it but to take a wire brush and brush the rust away. You want to get rid of all of the rust that you possibly can. Once you’ve done that, then you want to take some type of rust penetrant, and there are lots of them on the market. These get sprayed onto the rusty fastener and they penetrate into the rust, soften it, and make the bolt come loose a lot easier. 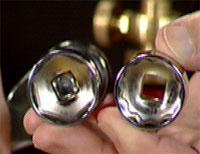 The next thing is that most people start out using the wrong socket. There are different types of sockets. This is a 12-point socket (right). This one here is a 6-point socket (left). The 12-point doesn’t exert as much force on each one of the flanks of the nut or bolt. The 6-point does a much better job and is much less prone to rounding off that nut or bolt. But here again don’t put a lot of force on it, because a lot of force is going to break something.

So if it doesn’t come loose with a reasonable amount of force, the next thing you do is a propane torch and you heat that nut or bolt, and you heat it as far away from where your socket is going to go as possible. Then you spray more of your rust penetrant on it. The rust penetrant will migrate toward the heat and again help soften that rust.

If it still doesn’t work now you may have to resort to a special socket like this one. This has tapered grooves in it so that when you loosen the nut these tapers in here bite into it and really grab it. Usually that will get the job done. Follow the rules and don’t use a lot of brute force and you’ll get through the job without breaking anything and it will be a lot easier to do.