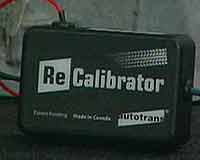 This time we’re going to talk about some products that can really save a lot of time, money and aggravation. Here we have an assortment of things from the Autotrans Company. They specialize in units that can be added to automatic transmissions, to make them shift better, to make the torque converter clutch work more effectively and, well, one of the most important ones is right here. This is a ReCalibrator. Now the ReCalibrator is used on cars when you change the rear end gear ratios or you make a tremendous change in the size of the tires and wheels. Now why would that be necessary? Well, modern automotive computers can sense things like this, and they can also throw your automatic transmission into a limp-in mode. So you’ve got second gear in most cases. That’s it. Well, the ReCalibrator will recalibrate everything so that it matches the new gearing and the transmission shifts properly.

Now here we have the Snap-on Smart Data System. Actually what it is is a personal digital assistant. A pretty clever idea because it has tons of information in it. It’s stored on replaceable cartridges that go into the back of it. It gives you information about anything you might want to know about specifications, component locations and so on for automobiles. This is, of course, a professional tool for technicians, but it gives you a wealth of information. It’s like having a full-fledged computer right in your pocket.

Now here’s something very mundane, but no toolbox, whether it’s a do-it-yourself toolbox or a professional toolbox, should be without a pop rivet gun. There’s all kinds of things on a daily basis that you’ll find that work well trying to hold them together with blind pop rivets. They’re very inexpensive and the uses are almost limitless.

Our last item is the Phoenix Injector. The Phoenix Injector can be used to transfer fluids out of containers, out of reservoirs and so on, or to put it back in. It can also be used to bleed brakes, as we’re demonstrating here. Now the benefit to that is that it’s a whole lot safer on the brake system on a modern car to draw the fluid out of the system rather than use the pedal to pump the fluid out of the system. Very effective both for do-it-yourselfers and professional technicians.