JOHN DAVIS: Pat, do you realize that in 40 years we’ve outgrown three Goss’ Garage sets, and that you’ve taped more than 1000 segments… that’s a lot of car care. 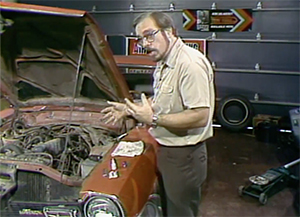 PAT GOSS: It sure is, and to think that it almost didn’t happen. In the pilot show, Craig Singhaus was the mechanic and the segment was called “Motorshop.” Maybe if things turned out differently, I might have hosted the high road segments and I could have driven the Weinermobile instead of him!

JOHN DAVIS: Well Pat, I wouldn’t change a thing, I think it has worked out just fine the way it is.

PAT GOSS: You can say that again!

I sure don’t miss that hot noisy gas station we filmed in for the pilot and first Goss’ Garage episodes.

Despite its cramped quarters, moving into our garage studio was truly an air conditioned luxury. By the time we got a car and a couple cameras in there, I could barely turn around!

Now, having a working lift and room to spare has helped us deliver better information to our viewers, and that’s what it’s all about for me.

But what’s really amazing is how far automotive technology has progressed. Back in 1981, we didn’t have computers in our offices, much less in our cars!

Looking back at some of those early shows, it’s shocking how crude most cars were, and how much we take for granted today. 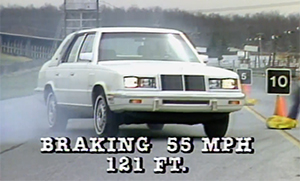 ABS brakes were virtually unheard of in the 80’s...we were impressed then when a car had four-wheel disc brakes.

A good stopping distance on the test track was some thirty feet longer than today’s average, and hard stops were usually accompanied by copious amounts of tire smoke!

Radial tires were a noteworthy option on our early test vehicles. Even so-called exotic cars rode on rubber unsuited for today’s econoboxes. 13” wheels were the norm, while 15’s were a big deal.

A luxury car was anything with leather seats and power windows.

A cassette deck was considered state of the art. Navigation required a passenger and a paper map and dual-zone climate controls meant you opened both front windows.

The typical car in the ‘80s came equipped with a three-speed automatic or a four-speed stick shift. Who would have thought that six and seven-speeds would become the norm, and that any car would ever need ten gears?

The simple tune-up is now a thing of the past, and individual replacement parts have given way to modules and assemblies for nearly every system on a modern automobile. 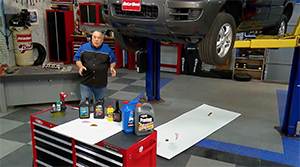 So, as cars have become more complex, the focus of my segment has shifted from do-it-yourself, to know-it-yourself.

Today’s vehicle owner needs to be more informed than ever to make the right decisions on finding a service provider and saving money on costly diagnostics.

But there’s one thing that auto engineers haven’t been able to do away with, despite all the computers and sensors and billions of development dollars...

I said it in our first show, and it still holds true today:

The one single thing that is most important as far as the life expectancy of your car, is changing the oil.