The Truth About Long Life Oil 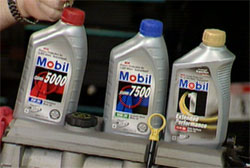 Over the years vehicle manufacturers have continually extended the oil change interval on their cars, and that has posed a problem up until just recently because most oils weren’t capable of going these extreme oil change intervals. The additive packages in them weren’t good enough. Well, now Mobil has introduced three new oils. They have a 5000, which is a conventional oil good for 5,000 miles, a 7500, which is a synthetic blend that’s good for 7,500 miles, and a full synthetic that’s capable of going 15,000 miles for some of those cars that are rated for 13,000 or 15,000 miles.

But now you’ve got the oil, there’s another problem. That other problem is the oil filter, because many filters are not designed to go these extreme distances. Now here we have five oil filters. They’re all from Fram. They’re all for the same vehicle. Now we’ve cut them apart so that you can see the differences inside. Some have paper end caps. There’s a difference in the pleats. There’s slight differences in the valves and things like that.

Now out of these there are two that are noteworthy. The one in the middle is an oil filter that is capable of going 7,000 miles. So if you have a 15,000 mile oil change interval, you’re going to have to change this filter twice. On the far left we have one that’s rated for high mileage cars, 75,000 miles and up, and it has an additive built into it that is time released.

But now one thing to consider; vehicle manufacturers, if they state that they have this long oil change interval, that means that their oil filters are designed for that long interval, like this one from BMW which is a canister type filter. In other words, it doesn’t have the tin around it. It just fits into a container on the engine. It’s designed right from the beginning to be good for the recommended oil change.