Here’s a part that, well, you probably wouldn’t recognize because, for the most part, it’s outta sight, outta mind. This is a throttle body, and it’s what controls the speed of your vehicle. 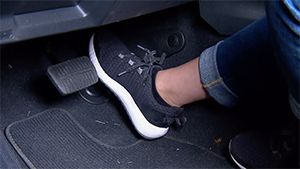 You see, if you depress on the accelerator, either a motor or a cable is going to operate this lever, and what it’s going to do is open these throttle plates in here. Those throttle plates allow more air into the engine, well the computer senses that increased amount of air, mixes the appropriate amount of fuel with it and you go faster. Alright, well also in throttle bodies sometimes there is what is called a Venturi Effect.

The Venturi Effect is where we take air and we go from a larger chamber into something that kinda squeezes it down and then lets it expand again. That accelerates the speed of the air, but it also cools it, very cold.  So, when we have a venturi effect, we can have a situation where we wind up with frost that forms inside the throttle body. Alright, now how do we correct that? Well, on some vehicles, the way they do it is by putting coolant through the throttle body. 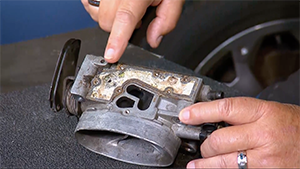 Here we have a throttle body that would have a cover on it, this would be a coolant passage in here…poorly maintained coolant, it actually ate a hole right through the throttle body. We can see it right there. Now, what that did is it allowed coolant to get into the engine. That caused the engine to hydrolock and it was condemned as having a bad engine. We diagnosed it. We found this leak in the cooling system and we were able to salvage the engine. Alright, now, if you have a mysterious loss of coolant, or you have an engine that mysteriously locked up or something like that, be sure to check to see if your car has a coolant-heated throttle body, and look for perforations through the metal in that throttle body.

And if you have a question or a comment, drop me a line right here at MotorWeek.