Cars are slowly moving away from timing belts. More and more cars these days are equipped with timing chains. But that still leaves millions and millions of cars on the road that have timing belts. Now, timing belts should be looked at like tires or brakes. They have a life span. They do wear out. And they need to be replaced, otherwise you’re going to be stranded or, in some cases, if the timing belt breaks, you could experience severe damage to the inside of the engine.

Now, the first thing you do is you look at the owner’s manual, and you may find that there is a time or mileage recommendation in there. But then again, there may be no recommendation for replacement of the timing belt. In that case, the generic time is four years or 60,000 miles, whichever comes first. Time is just as damaging on parts like timing belts as mileage. So don’t risk it. Get it replaced when it’s due. 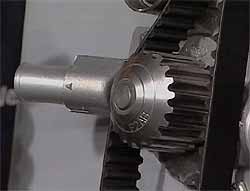 Now also, when you replace the timing belt, there are other things to consider. Number one, many cars use the timing belt to drive their water pump. Well, when the timing belt is being replaced, that’s a good time to put a new water pump on. It would be a shame to have that pump fail shortly after a new timing belt and destroy the belt or do damage to the engine. Along with that, timing belts have tensioners, and that should always be checked very, very carefully when the belt is installed. And if it is the second belt on your car, then you always replace the belt tensioner. 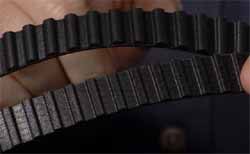 Okay, but there’s something else with belts, timing belts that is. There are different types of them. Now there’s more to this than just the length and the width of the belt. The teeth themselves are different. There are square cut teeth and round teeth, and they can’t be interchanged. One size definitely doesn’t fit all here. If you get the wrong configuration of belt on there, its life will be compromised and it may fail very, very quickly. And again, it could do damage to the engine.

So follow the rules, four years or 60,000 miles, or the recommendation in your owner’s manual, and you won’t have any problem. Your car will be very reliable.