Timing belts have a limited life span, so it's important to change them at the right time. So what's the recommended change interval? Well, consult the owner's manual for your particular vehicle.  Pat Goss has more on when it's time to change the timing belt.

If you own a car with a timing belt, it is imperative that you change it according to the manufacturer's specifications. And don't try to cheat on it. Reason is that if a timing belt fails on a lot of these engines, what'll happen is that the valves up on the top of the engine will collide with the pistons in the bottom of the engine, and that's either goodbye valves, or it's goodbye valves and engine. Not a happy ending. 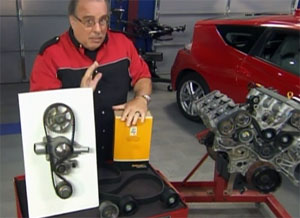 Where do you find the recommended change interval? Well usually it's going to be in the owner's manual, but they usually only give it in miles not in time. So, the generic recommendation is to never allow a timing belt to remain on an engine for more than five years. Time is just as much an enemy as is mileage. Here we have a mockup of this to show you what goes on. Up here we have this larger pulley that drives camshaft in the engine. Down in the bottom we have the crankshaft. The crankshaft produces power from the pistons. It rotates this belt to turn the camshaft to keep everything in-sync. Valves open when they're supposed to and so on.

Well, you look for a kit. Continental puts these together, and it includes all of the wearing parts that go with the timing belt. Idler pulleys, and tensioners, and things like that. And, where it's applicable, even the water pump. So, you look for the kit that keeps you from having the failure of these other parts that means you pay twice, because you have to take everything apart again, and that saves you money.