We usually don’t think about it, but some of the most highly engineered parts of a modern car are its tires. And here to explain that, is Matt Edmonds, a tire expert. Matt, welcome to Goss’ Garage.

MATT EDMONDS: Thanks for having me, Pat.

PAT GOSS: Okay, tell us what we’re about here, with this cutaway.

MATT EDMONDS: Okay, well you know, a tire on their side, looks round and black and they all look pretty much the same. But really, when we take a look at a tire, even a cutaway, it just looks like black rubber that’s been poured into a mold. Once we go to this view, which really is called a peel back, we peel layers back like an onion; we really see there’s a lot more to it.

PAT GOSS: Yea, this is pretty complicated. Starting here we have… 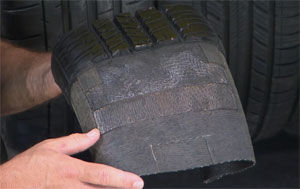 MATT EDMONDS: You’ve got belts that get laid down initially, the carcass and really form and create the foundation that the tire is built on. Then steel belts that go on top of that. Again, adding more rigidity. These get nylon wraps on them. They use wedges in the shoulders and sidewalls, already with the steel cable that becomes the bead of the tire. All of this is really cured together with the rubber to create a composite structure.

MATT EDMONDS: Oh, absolutely. I mean, the steel belts; some use Kevlar for the belting. Really trying to create a structure that’s extremely strong, keep it as light as possible and it’s very very complicated.

PAT GOSS: Alright, and speaking of complicated: just minute changes in the angles of various components in here can make a huge difference in how the tire performs.

MATT EDMONDS: Oh yes, I mean, a half degree in belt angle will make a big difference in the way this tire really works as a structure.

PAT GOSS: Well when you think about all of this, you think about the punishment that it takes. Going down the road, you hit a pothole at 60 or 70 miles an hour; the forces on these tires is enormous.

PAT GOSS: Well I think we ought to have a much greater appreciation for our tires.

MATT EDMONDS: Well, we really should. I mean, they’re a very vital, important part of the car. And an engineered structure to go along with it.