Tire pressure monitoring systems are a great safety feature on cars.  But sooner or later you’ll need to have that system serviced or at least the tires and wheels serviced, and that means that you need a shop that understands the system and has the right equipment.  To explain some of the things that you need to look for we have Kevin Rohlwing of the Tire Industry Association.

We have a couple of different types of sensors that are used in these systems can you explain them to us? 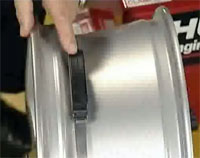 KEVIN ROHLWING:  “There are two types of sensors that are used for tire pressure monitoring systems in original equipment vehicles.  One is an actual valve-stem sensor where the transmitter itself is attached to the valve-stem either permanently or with a torque-screw.  The other is a band-mounted sensor where the sensor is attached to the center drop of the wheel using a strap or a band.”

So band-mounted - are these only after-market?

ROHLWING:  “No, actually there are some new vehicles right now that do have band-mounted systems as original equipment fitments, particularly in some of the Ford products.”

So band-mounted and up in here we can see the valve-stem unit.  Now either one of these can be damaged if the technician doesn’t follow procedure?

ROHLWING:  “Definitely.  Positioning of the valve-stem sensor is critical for both demounting and mounting.  If it’s not positioned in the proper place, when the bead itself drops into the drop center to demount or mount the tire, it will pin the sensor up against the rim and break it off.”

Alright, we can see the bead down here and when this comes down over the edge of the wheel, down into the drop center, tremendous amounts of force here. So ...

ROHLWING:  “Absolutely, particularly when you get into the larger size tire with higher rim diameters and smaller aspect ratios.”

Got to be done right.  Okay, now what’s another problem that consumers might run into?

So you would have to replace the sensor?

All right what about the caps?  They’re special too.

ROHLWING:  “Caps have to have a rubber O-ring seal up in the base.  And that acts as a primary seal and a secondary seal to the valve-stem itself.”

Now on some cars there’s going to be a need to re-program the system following any type of service.  So that means some special equipment.

ROHLWING:  “Definitely.  Depending on the make and model of the vehicle it’s going to require a re-learn or re-calibration procedure.  Having the proper scan tools with the updated software is going to insure the TPMS is monitoring the tires after the tires have been replaced or repaired or rotated.”

Okay, now what about disabling these systems?

ROHLWING:  “It is against Federal law to disable a tire pressure monitoring system and substitute either a rubber snap-in valve-stem for a valve-stem sensor or a band-mounted system.”

Now, but that only applies to the originally equipment wheels.  It doesn’t apply to after-market.

ROHLWING:  “That’s correct.  If the after-market wheel will not accommodate the valve-stem sensor because of a difference in the contour of the rim then it doesn’t have to be installed.”