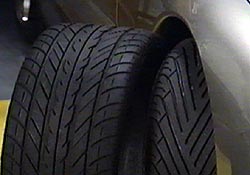 Every piece of a car can be customized these days, and that even includes the tires. And here to talk about that is Matt Edmonds from the Tire Rack. Hi, Matt.

Goss: On my car, I was willing to trade some things to get a quieter tire.

Edmonds: One of the things that consumers have to do when they’re looking for a new tire is look at the original equipment tire. For instance, this tire, the Goodyear that was developed specifically for Chevrolet, for the Corvette, had certain parameters that the engineers demanded. You’ve gone to a tire by Yokohama that gives you a quieter ride. You’ve looked at the three factors that we consider whenever we’re trying to put a consumer into a tire different than the original equipment: the performance, the comfort, and what kind of tread wear they’re looking for. And once they prioritize that, then we can lead them into performance categories. 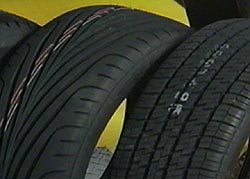 Goss:Okay. And speaking of performance categories, we have an assortment here, starting over here.

Edmonds: We have tires that start with an all-season tire that really is what most original equipment tires are - good in everything, not great in any one thing. But then if you want to tune your car, go to something that performs really well in the wet, really well in the dry. An ultra high performance tire. But it won’t do anything for you in the wintertime if you run into ice and snow. So we go to a dedicated winter tire.

Goss: But there you want to use four of them. 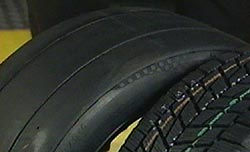 Edmonds:You have to. Four because you want both ends of the car connected. It doesn’t do you any good to be able to accelerate and not steer. And then for those that really want to get into the racing aspect of it, we have a DOT street-legal racing tire.

Goss: Okay. So lots of things to pick from. Now, no matter what the tire, you have to maintain it. 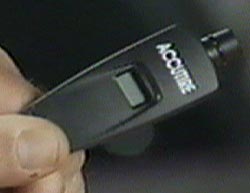 Edmonds:You really want to maintain these tires, and it’s as simple as a small digital air gauge that you can put on your key chain. This allows you to check that tire pressure at least once a month, maybe once a week if you’re really good at it.

Goss: Now, there’s also something exciting coming along, and that is nitrogen for tires.

Edmonds: This is a technology that’s now coming to the consumer that’s been out in the commercial market. It’s been used in airplanes, it’s been used in a lot of other applications, but now it’s really coming to the consumer where it keeps consistent pressure within the tire. Nitrogen doesn’t change with temperature, so you don’t have that fluctuation in air pressure based on temperature outside, as well as it doesn’t leach out of the tire. Nitrogen molecules are nice and large.

Goss: So it’s something that the consumer should be looking for.

Edmonds: Yes, they should.