Home » Features » Goss' Garage » Too Much Zinc In Your Oil?

Too Much Zinc In Your Oil?

PAT GOSS:  Modern oils are a complex cocktail of base stocks and additives and there’s one additive that’s quite controversial these days, and here to give us some tips on it is our old friend Thom Smith.  Thom is a lubricants engineer or chemist.  And welcome back to Goss’ Garage.

GOSS: All right, now the product that we’re talking about here is commonly referred to as Zinc. 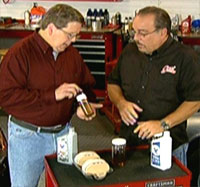 SMITH: Yes, and this is it right here. It’s actually a family of additives Zinc-dialkyl-dithiophosphate. But let’s stick with Zinc or phosphorous when we refer to it.

GOSS: Okay, now this has quite a long history in oil.

SMITH:  Yes, it was first used back in the 1940s, as a corrosion inhibitor to fight lead-copper corrosion.  But they found that it was also effective as an anti-wear agent.  So back in the late ‘50s they started increasing the level of it.  So there were about 300 parts-per-million of phosphorous back in the late ‘50s to help protect against wear, and as engines got more powerful, with the smaller displacement, more stress in the engine the levels went up.  So that by the time we got to the ‘80s we were looking at 1,200-1,400 parts-per-million.

GOSS:  Okay, but then there came a point where you started to cut back on it primarily because of catalytic converters.

SMITH:  Yes, the phosphorous in the zinc-dialkyl-dithiophosphate unfortunately performs a phosphate coating in the catalytic converter, and this reduces the efficiency of the catalyst.  So we’ve had to cut back on the level that we use.

GOSS:  But how much?

GOSS:  Okay, it that really an issue?

SMITH:  It really isn’t for the vast majority of vehicles.  We’ve done a lot of work to show that with these levels, you’re still getting good, solid anti-wear protection.  The one area where people do have concern are with flat-tappet engines.

GOSS:  Okay, so if somebody has an older engine is it a problem or can they buy a special oil that has more zinc in it?

SMITH:  Well it’s not a problem once the engine is broken in.  The big issue is when they break the engine in, so if they are rebuilding an older engine they really need to use something like a racing oil where there’s a higher level of phosphorous in it.  And racing oils, they can still be the 1,200 parts-per-million and get a good beak in on the engine.  After that they are fine at running it at the 800 parts-per-million.

GOSS: Okay, so it is a problem but it isn’t a problem, and if they’re really concerned, buy a racing oil and everything is covered.