Maintaining a flawless paintjob like we see on this classic Jaguar… that’s next to impossible on a daily driver because sooner or later somebody or something will scratch or ding the paint on your car. 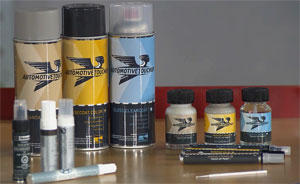 And that means it’s time for touch up paint. Touch up comes in a lot of different forms. You can buy it from the dealer where you bought your car. Auto Touch Up has products such as you see over here, in spray cans, in bottles and in pens. The big thing is, that number one, you have to know the paint code on your car. Just like black for instance, everybody thinks black is black but that’s not the case.

There are metallic blacks, there are metallic tint coat blacks and different things like that. And all though they may look very similar, put the wrong paint on it and you’re going to wind up with something that may look worse than the scratch did.

Big thing though, is to follow procedures. We’re going to use this Eastwood Prep Solvent because that is a vital part of doing any type of touch up. We’re going to spray this on to the scratched area and what we’re trying to do here is to get all of the wax and dirt out of the scratches. Now if you don’t do that, when you apply the paint, the paint will just migrate away from the scratch. 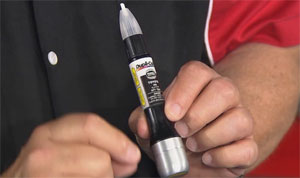 Alright, now, we’re going to use in this case a Dupli-color pen and it has multiple features all in one housing. First here on the end, this is a tip that is designed to get down into the scratches and if there’s any loose paint left around the scratch or anything like that, what’s going to happen is this is going to take it away so it doesn’t chip after the painting.

Once you’ve done that, then we have a fine tip right here that can be used for little scratches such as we see on this particular door. And that fits right down into the scratch like so. If you have a bigger scratch, this unscrews and then we have a brush in there.

And finally once everything is done, in the Dupli-color in the other end you have a reservoir with clear in it, and an applicator for the clear which is going to seal the work that you’ve done.

So all in all you could wind up, if you take the time and follow directions, an almost invisible repair to the paint but more importantly something that won’t deteriorate further.