One of the things that most drivers, they don’t pay attention to, is the cleanliness under the hoods of their cars. You know keeping a car clean all over makes it worth more money, but keeping it clean under the hood can actually make it last longer and it can make it run better. 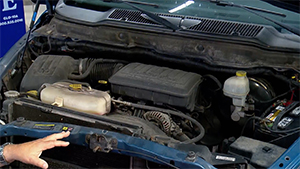 Now the reason for that is all the dirt and grease and everything, that builds up on the engine and related parts, it does a number of things. The oils and greases and so on; it can deteriorate insulation on wiring and deteriorate hoses and things like that, anything made out rubber, does not like grease and oil.

The other thing is that the dirt on the engine causes it to run hotter because it acts as an insulator so that we don’t get as much air movement, or air absorption of heat from the engine. So it’s a good idea to keep it clean, but how do you go about doing that because you certainly don’t want it to look skunky like this.

Alright, one of the things that you can do of course is you can use an engine degreaser. The engine degreaser, you have to read and follow labeled directions, because in many cases it may be illegal to use in your particular part of the world. So we do that, we also want some way to capture the grease and everything that comes off of the engine so we put a big plastic sheet under the car to collect that. And the next thing that we do is well we can use a power washer on a low setting or a garden hose once we have followed the directions and put the cleaner on then we have to get rid of it so power washer or garden hose. 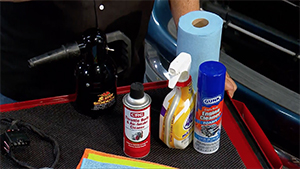 Now something else that you might want to consider is just using a regular household cleaner on a lot of the plastic parts and things like that, but remember unless you use a brush you know you just spray this stuff on and hose it off it will look great while its wet and then when it dries it looks as nasty as ever so you have to brush it and scrub it clean.

Also, you may find that you want to dry it if you have something like this, an airforce dryer, you can dry the engine and the related parts out. Now the other thing is, while you’re in there, all these parts in there and everything cleanliness is really good so throttle body you’re cleaning things you may want to clean the throttle body and if there are other things that are appropriate on your car do that. Also anytime that you remove a wire connector to do a repair or anything use dielectric grease to keep the moisture and stuff out of the connectors. So if you do this you can actually increase the life of your engine.

If you have a question or comment drop me a line right here at MotorWeek.