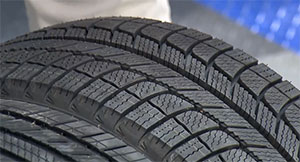 If you live in an area where you get any amount of snow whatsoever, there is the eternal question: Do I need winter tires? And to shed some light on it, we have our tire expert, Matt Edmonds. Matt, welcome back to Goss’ garage.

Pat: Alright, we have some examples of tires here. Give us a primer.

Pat: Alright, so what are we losing and gaining between the two?

Matt: Well, you know, an all-season tire is good in anything, not great in anything. If you go to a dedicated winter tire, it’s like putting on those boots when you go outside in winter’s worst conditions, so that you have the maximum control and performance. And performance equals safety. 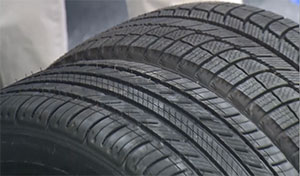 Pat: Ok, so significant advantages when the snow is on the ground with dedicated snow tires.

Matt: Also, when there isn’t snow on the ground because what ends up happening is this tire has been really built to work in those cold temperatures. So the rubber stays nice, pliable and soft. So when the pavement is dry, you still have that grip. And all-season tire might get a little harder. If you had a performance summer tire on, it’d be like rock-hard plastic on that pavement.

Pat: Ok, but then why do we want to have snow tires and change them. Why not run them all year round?

Matt: That’s something that manufacturers are starting to address, with this three peak mountain snowflake which is a symbol that we’ve seen only on dedicated winter tires. It’s now starting to show up on some all-season tires that we say have “enhanced winter traction.” So these have been tires that now are just not based on their geometry, good in the winter conditions but also with some of the engineering in the compounding, etc has been developed to really work better in winter. They’re an all-season tire that has been stepped up a bit shall we say in its winter performance. 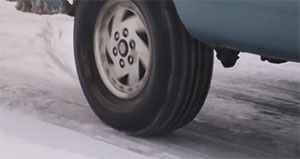 Pat: That might be a good alternative for lots of folks.

Matt: Lots of folks are in that marginal are where you don’t have winter conditions on a day-to-day basis. You may have mild winters, a dusting of snow or some really cold weather days. But, not on a consistent basis.

Pat: And that would also do away with changeover.

Matt: That would simplify things a little bit for some people but some people, again still like that ability and as much as they say “Well gosh, I’ve got a second set or tires.” Well, they’re resting while the others are working.

Pat: Gotcha, Matt, thank you. If you have a question or comment, drop me a line right here at MotorWeek.