Home » Features » Goss' Garage » You Light Up My Life

You Light Up My Life 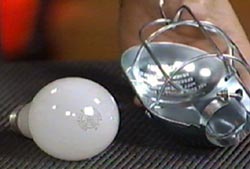 The peak of frustration is when you’re trying to do something under the hood or under the dash of your car, and you can’t get the right kind of light. You just can’t see what you’re doing. Well, the old standby for a drop light is this metal cage affair here. It works well and it’s quite durable, but it has a significant downside. It uses an incandescent bulb. They produce a lot of heat, and this thing gets hot. Now that means that if you lay it on something that’s plastic under the hood it’s probably going to melt the plastic. If you’re working under the dash, well, you lay it on the seat or you lay it on the carpeting, it’s going to melt whatever it’s laying on, plus it’s easy to get burned with it.

All right, so the next step in the evolution of this was the plastic cage. Well, it also uses the same incandescent bulb, but it has the advantage that it doesn’t get hot. It doesn’t burn anything. But the downside to it is the light glares through the back side of it. So if you’re working, oh, say under the dash, it can actually be very annoying. So it’s better than the metal one, still not the complete answer.

Of course you could take the cage off completely and you could replace it with one of these flourescent units [right], such as we have here. This does an excellent job. Well, there are more steps, though.

As time has gone on, well, we have lights like this one [left]. Now this is impressive because it’s small, it’s battery-powered, it’s rechargeable, and it’s LED. So it gives you a lot of light, it doesn’t glare, but it is expensive.

All right, flashlights. Of course that’s always something that you need around an automobile, but conventional flashlights don’t, they don’t last all that long. The batteries go dead and the light may be pretty feeble and so on. So again, LED to the rescue.

Here we have a high quality one with LEDs in it. The light will last for hours and hours before the battery goes down, plus it’s bright and it doesn’t produce glare. 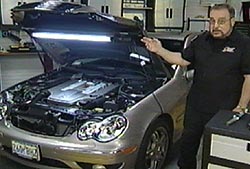 All right, but if you want the end all, be all, here we have it. This big unit that hangs from the hood or any other place that you might want to hang it. It’s flourescent and it just gives tons of light so that it’s really easy to see under the hood of a car, or underneath a car, for that matter. Now all of these lights are great, but there is a downside. The better or the more modern the light, the higher the cost.