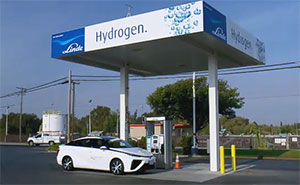 The freedom to hit the open road has always been at the center of our love for the automobile. But for some drivers, choosing a vehicle powered by cleaner fuels like natural gas or electricity has meant limiting that freedom due to gaps in the nationwide fueling and charging infrastructure. Well, that is rapidly changing as many major highways and roads are being designated as alternative fuel corridors. So planning cross-country road trips for your alternative fuel vehicle or fleet is becoming easier than ever.

In July 2016, the fixing America’s surface transportation, or fast act, called on states to nominate fueling corridors along major national roadways that support plug-in electric vehicle charging, hydrogen, propane, and natural gas refueling with existing or planned infrastructure. To qualify as alt fuel corridors, these routes must have stations that are open to the public, and sited within easy reach of these roads. Most importantly, stations need to be plentiful enough to allow vehicles operating on these clean fuels to travel long distances with no worries about finding fuel or charging stations along the way. 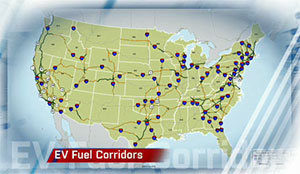 The alternative fuel corridor network currently includes sections of nearly 130 heavily traveled interstates and highways in 44 states. This covers more than 100,000 miles of the national highway system. The type of fuels available in each corridor varies: EV charging and compressed natural gas have the most availability nationwide. Fuel cell cars are still pretty rare, so hydrogen fueling sites exist mostly in California for now. Propane is most popular in regions of the country where fleets and specialty users like school buses and farmers have adopted those fuels.

Uniform signage has been developed to identify the start and end points of the designated alt fuel corridors, so travelers can have a consistent reference point to look for. South Carolina was among the first states to install the road signs, along parts of I-20, I-26, I-77 and I-85. Officials there have already noticed an uptick in alternative fuel interest as a result.

Landon Masters: We’ve already gotten a lot of people reaching out directly to us: media, and just consumers that are interested in – what are these signs and what do they mean? So, if nothing else, it’s started a conversation. But the fact that they were asking the question and learning more about it, is important to us. 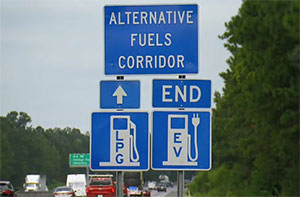 A consortium of state agencies, utilities, alternative fuel providers, car manufacturers, and clean cities coalitions working in conjunction with the U.S. departments of energy and transportation, have come together to develop and promote the alt fuel corridors.

Non-profit industry group Calstart and its 175 member companies are focused on advancing clean transportation. Calstart has been leading the charge for making clean fuels readily available nationwide, and especially in its home state of California.

Alycia Gilde: It’s an opportunity to build awareness on the infrastructure that’s available, whether it’s electric, whether it’s natural gas, propane or hydrogen. If you’re an end user, whether you’re a fleet or you’re just a passenger, it’s helpful to know where exactly can you get access to that fuel? So signage is really important in terms of informing that driver, as they’re passing along the highway, to see that signage, to know that there is a location for them to drive off and fuel up when needed. 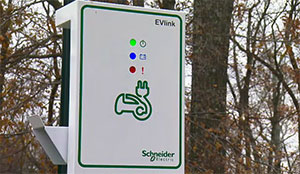 In the drive to diversify America’s transportations energy sources, spurring development of clean vehicles and building out a national network of convenient fueling points for natural gas, propane, hydrogen and electric vehicles goes hand in hand. And the alternative fuel corridor project is fast making these so-called alternative fuels a fine first choice instead!