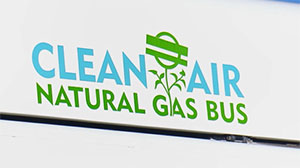 The transportation sector accounts for a significant portion of the fuel and energy consumed in our country, and is also responsible for much of the pollution that clouds our skies. So, for many cities, both energy independence and air quality are growing concerns.

The solution, of course, is to make smarter energy choices that reduce vehicular emissions, but it takes more than a few hybrids and hyper-milers to make a meaningful impact. It takes a collective commitment, and one region in Utah is making an Olympian effort to do just that.

The 2002 winter Olympics host, Salt Lake City, Utah, already encourages mass transit with an extensive network of commuter trains, light rail, and transit buses, many powered by compressed natural gas, to move people seamlessly from the suburbs to downtown and of course to nearby ski resorts.

And under a new project called Westsmart EV, funded by the DOE and led by Utah Clean Cities Coalition partners, the region is building on that success by adding practical electric-driven transportation solutions into the mix. 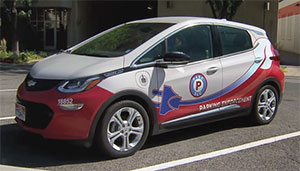 JAMES CAMPBELL: Well, the Westsmart EV Project is really intended to increase electric vehicle adoption in the intermountain west… one was to address, to build electric highways by installing fast-charging stations all along Interstate 15, Interstate 80 and Interstate 70, so the major interstates, to address long range, range anxiety.

The number of electric vehicles registered in Utah has jumped from 3400 to around 9000 since 2017. EV market share, while still below 2% statewide, has nearly doubled in the past year.

Financial incentives for ride-share drivers to buy EVs account for a good portion of that, plus the increasing availability of fast-charging stations near airports and popular tourist destinations.

Visitors to nearby park city can charge up their electric cars, hop on an electric bicycle, or board one of these “electric express” shuttle buses for a free ride around town.

In just over two years, the EV buses have racked up more than a million energy efficient emissions–free miles …. That’s the largest cumulative miles of any electric bus fleet in the U.S.

JAMES CAMPBELL: Our second approach was to really go after workplace charging. We know that, if you have charging at work, you’re more likely to buy an EV. So this really went after the daily commuters.

One enthusiastic early adopter of work place charging was Packsize, a maker of just-the-right-size cardboard boxes. Packsize has installed more than 50 free electric vehicle chargers at its Salt Lake City headquarters, and more than half of the company’s employees now drive electric as a result.

HANKO KIESSNER: Workplace recharging is a solution that we are using to create a livable environment right here in the Wasatch Front Airshed. At the company Packsize, we found that we were limited to grow by the number of people that we could attract to move into the state. And, as millennials are googling “Quality of Life”, they’re finding that air quality is one of the number one challenges in this area, and at that point, we at Packsize decided we have to be part of the solution. 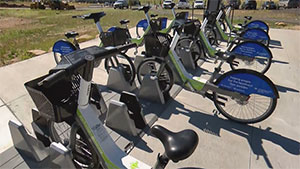 But Packsize didn’t stop there. They went all-in on encouraging others to follow their lead.

HANKO KIESSNER: We then decided that we can scale this program to other businesses and at that point, we founded Leaders For Clean Air, which is a non-profit organization that helps other companies to do exactly what we are doing at Packsize, and we are now placing one new charger every day.

Lancer Automotive saw the drive for cleaner air and energy independence as an entrepreneurial opportunity, and has refocused its business to get ahead of the curve. This repair shop now specializes in the maintenance of alternative fuel vehicles. They install EV charging equipment, perform natural gas and propane conversions, and conduct training classes to educate fleet managers and consumers on the benefits of alternative fuels.

Salt Lake City’s model of public investment fostering private commitment proves that the region is truly embracing its smart energy & clean air challenge. And creating a true spirit of community that just might be a winning template for the rest of America to follow.