It’s anticipated that there may be a million hybrid, electric and fuel cell vehicles on our roads by 2015. And for those who buy and drive them, the transition from conventional to electric drive will be relatively simple. But laying the ground work for this EV influx requires a lot of planning for things like the charging infrastructure and more importantly training for the people who will encounter these future vehicles in the repair shop, the salvage yard, or god forbid, at an accident scene. There’s a lot to learn, but for many it’s already begun.

A motor vehicle accident occurs, on average, every 12 minutes on U.S. roads. Many are just fender benders, but for the more serious ones, there are about 1.7 million firefighters, EMT’s and paramedics standing by to assist injured drivers and passengers. But as vehicles have become more technologically advanced, these First Responders are faced with new challenges:

For instance, the bright orange cables under the hood of a hybrid or electric car can carry more than 400 volts and the potential for serious injury or death by electrocution if they are cut or mishandled. High-voltage battery packs are built to withstand tremendous impact, but they can be compromised and must always be handled with extreme caution.

Advanced Technology vehicles still represent just a small percentage of the cars on the road, but there are dozens of makes and models out there. While some like the Toyota Prius are easy to recognize, many others are hard to tell apart from conventional versions of the same model, especially if badges are missing or obscured because of an accident. With all of this new and ever-changing information to keep straight, First Responders could easily make mistakes, especially when pressed for time.

FIREMEN (chatter): “Um, well, we’ll go ahead and disconnect the battery; I don’t hear it running.” “I don’t see no battery.”

JOHN DAVIS: This was just a training scenario, but fortunately the U.S. Department of Energy had the foresight to come up with a solution before that no-no could ever happen for real. Through both their Clean Cities Learning Program and the Advanced Electric Drive Vehicle Education Program, millions of repair technicians, infrastructure installers and First Responders are being given the training and tools they need to safely work on and around these cars and trucks. 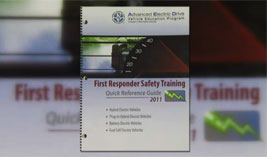 One of the most important tools is this Quick Reference Guide, Developed by the National Alternative Fuel Training Consortium, it is available in both print form and also as a smartphone app. The QRG lists every AFV, hybrid, fuel cell and electric vehicle that a first responder is likely to encounter, and gives step-by-step instructions for how to identify and immobilize each vehicle and neutralize any high voltage systems.

Another potential risk related to hybrid and electric vehicles is their ability to operate in “stealth” mode. The vehicle can be in gear, energized, and ready to drive away - but remain perfectly silent. All it takes is for a victim to suddenly wake up or have his or her foot slip off the brakes and someone leaning through an open door could be dragged or pinned as a result. So chocking the drive wheels or pulling the valve stems is a crucial first step, but it’s also critical in many cases to locate any smart keys or proximity fobs -- which may be in a purse, cup holder or pocket -- and get those away from the vehicle and out of range.

If you come across an accident scene, especially one involving hybrid or electric vehicles, call 9-1-1 immediately and let them know what kind of car is involved. Help the victims if you can, but don’t take chances with any vehicles. We’re thankful for the service of the brave men and women who serve our nation as First Responders, and are comforted in knowing that they’re training now to be ready for the electric-drive cars of the future.