While we’ve come a very long way from what cars once were, the foundation of today’s most sophisticated rides are direct descendants. Indeed, our over the edge guy, Zach Maskell, takes us time traveling for a reminder that not all new technology is as ground breaking as we might think.

ZACH MASKELL: They call it the sweetest place on Earth. I’d say the name surely fits where we found ourselves. 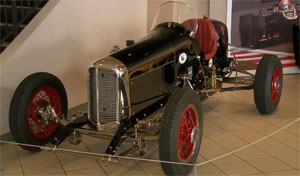 “It is the home of that marvelous chocolate that you know, Hershey, Pennsylvania… they’re over 100 years old and today we’re going to be looking at automobiles the same age but they’ve got stuff inside of them, that we see even in today’s cars”

I tend to be a visual learner, so the folks at the Antique Automobile Club of America agreed to let us see the engineering in person.

MARK LIZEWSKI: “By coming here you can certainly see how much cars have evolved. I mean the older cars were great, people always say, “ah people don’t build them like they used to.” And there's a reason for that. Because they didn't run like they do now. They didn't operate the way they do now and they certainly weren't as safe as they are now.” 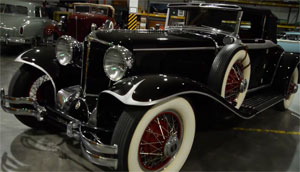 ZACH MASKELL: I look at this… and I think 101 Dalmatians, and Great Gatsby. Now I’ll think how it paved the way for most cars on the road today. Available in the American auto market… this was the first front wheel drive car.

“Alright Mark, a 1929 Cord, not to be confused with Ford... this one however a little more pricey, definitely for the wealthy.”

MARK: “Absolutely. You know when the L29 came out in 1929... It was about 3 thousand dollars. Which was considerably more than your average Ford. This was obviously is a very high end car for the wealthy.”

ZACH: It was also lower, and longer, with a straight 8 cast iron engine. I sure wouldn’t mind this sitting in my stable. Speaking of that, here’s the first automobile that didn’t require horses to power it. 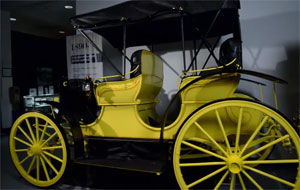 MARK: "It is an 1895 Benton-Harbor, built in Michigan. It is probably the oldest operating American automobile and likely one of the very first automobiles that were built in this country that started life as an automobile as opposed to a horse drawn carriage."

ZACH: This was supposed to be part of the first auto race ever held in the states, but production delays kept it away. With a top speed of 23 miles per hour… it would’ve been a contender for sure. A piece carried over to this, still lives on today.

MARK: "When the operator took off from a dash, the horses would kick up stones and gravel, so they put this piece of here to protect the operator, the people sitting in the front seats from getting stones whipped at them, hence the term, “dash board”.

ZACH: Something this didn’t have much of… safety. Moving ahead a few decades we have a car that didn’t need seatbelts because that would’ve damaged the reputation.

“Normally... when I think automobile and I think safety... I think Volvo. But after World War II... It was Mr. Tucker and his car.” 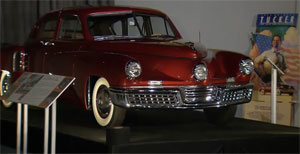 MARK: “Right... the Tucker 48. You know, Tucker was an entrepreneur... And an innovator and really a man of vision. He knew that the cars from the late 30s and 40s and before WW II... there really wasn't a lot going on there.”

ZACH: While GM and Ford had to refocus were on cars after the war, Tucker had already been brainstorming and set out to make a safe, high performance, low riding car with a top speed of around 120 miles per hour. He also had a center mounted swiveling headlight that turned with the steering wheel…yes it was the first “adaptive” headlight. He had also talked about 4 wheel hydraulic disc brakes, like all of our cars today… which was unheard of at that time.

"Alright so one of the same traits as the Tucker, but a completely different car, this is an earlier Lotus, low and fast was the name of the game... yes?”

MARK: “Absolutely, and this was you know the brain child of Colin Chapman - the founder of Lotus. 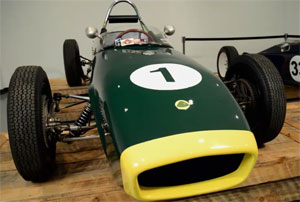 ZACH: Chapman’s mantra: “to lighten everything, and make it faster.”

"And would you say that the way even these wheels are designed…that that idea kind of carries over into today’s racing?

MARK: “Absolutely. This is a great example… this is a Lotus magnesium wobbly web wheel. if you look, it doesn't look like much, but because it's cast... all in one piece, with these spokes built in, where there really isn’t a spoke, which gives it a very light weigh wheel but also very very strong.”

ZACH: While few of these classic companies are around today… they definitely left a tire print… for all that followed.