We’ve seen some incredible engineering milestones in the last few years… particularly on the electric side of things. Instantaneous power and longer lasting batteries are making some four-wheel EV newcomers irresistible. But, what about in the “two-wheel” world? Well, let’s “shred” over the edge with Zach Maskell as he heads west on what just might be “the future of fast.”

“I’ve heard a lot about this San Francisco based company, and today we’re not only going to throw a leg over this Alta dirtbike, but we’re going to check out the inner workings as well.”

LAURENCE LEA: “It started in a garage in 2007, and it took about 5 years before we got the first working prototype.” 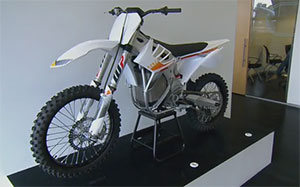 ZACH MASKELL: Inside the Brisbane, California factory, they assemble – you guessed it - all electric motorcycles. They offer a super moto good for 60 miles of asphalt cruising, an EX enduro bike for off-road plus urban assault, and for 2018, this, the new flagship of their arsenal… and the first track focused electric dirt bike we’ve driven yet,  the Redshift MX-R.

DEREK DORRESTEYN: “The 2018 MXR is a substantial improvement over the last year’s MX base model. We’ve increased power dramatically, from 40 horsepower to 50 horsepower to the rear wheel.”

LAURENCE LEA: “Twist the throttle, which activates the motor controller here. The motor controller, basically think of it as a set of valves on a traditional bike and what it does, is the more you twist it, the more it distributes the power from the battery.” 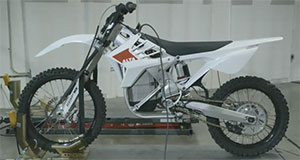 ZACH MASKELL: From the battery, power goes to the motor, which goes down to a gear reduction… that turns the chain. And waaalaaa the wheel is spinning.

We charged up and headed to Diablo MX Ranch… for a practice session alongside Alta’s in house rider.

BLAKE NICHOLAS: “I didn’t think so and I didn’t feel like it but looking at the data I am faster on this bike.”

ZACH MASKELL: I know there’s 147 ft-lb of torque to the counter-shaft available in a split second. I pictured myself twisting the throttle and the bike looping out from under me, sending it to the moon. But I started off slow – And just like that, a grin was glued to my face. 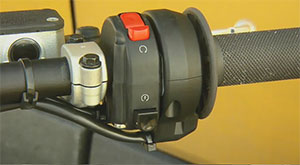 LAURENCE LEA: “The smooth control and the preciseness that’s delivered from an electric motor can have you in the perfect power band all the time.”

ZACH MASKELL: It’s got 4 preprogrammed maps, which you can adjust on the fly with the touch of your finger. It changes traction, engine braking, and power delivery for the single speed transmission. Think of MAP 1 as a good technical back woods choice, and MAP 4 for a max power track attack. Brembo brakes, Warp 9 wheels, WP suspension and Dunlop tires from the factory. While this does weigh about 30 pounds more than a traditional bike… it doesn’t ride much different.

LAURENCE LEA: “The bike is IP67 certified. Which means basically, it can be submerged up to a meter of water up to a half hour.” 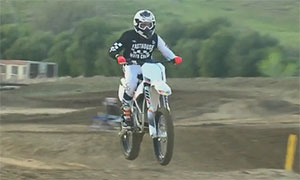 ZACH MASKELL: At full open throttle, a pro rider would get about 30 minutes battery time. My bike, had a quarter of battery life left… when my tank was on empty and I had to call it a day.

Those gas bikes also cost around $9,000. But considering the frequent maintenance, and performance upgrades most riders opt for, this electric bike’s pricing isn’t that far off.

And like other electric motorcycles we’ve driven, no more noise complaints from the neighbors.

Seeing that it took all of a couple laps to get comfortable on this alien object – I’m now a believer this way of using electrons could very well be the “future of fast.”