For those who find it impossible to follow a crowd, mediocrity is a killer. A cookie cutter life-style just isn’t for them, or for the cars they drive. So, let’s see how one artist keeps his creative juices moving, as we go over the edge – and drive mobile art - with Zach Maskell.

ZACH MASKELL: “So there you are just cruising along and you come across something interesting. Instead of just cruising by and taking a picture, why don’t you stop, and take a look.”

This feast for the eyes sits in Hyattsville, just minutes away from University of Maryland’s College Park.  We’re bending, mending, and building inside the world of retired art conservator Clarke Bedford.

CLARKE BEDFORD: “I started making assemblage sculpture and whatever many years ago. I’ve always made it. It’s my favorite. Found object things is traditional Cubist art form. It’s 100 years old. In terms of doing an environment, the house, the cars and all that it started maybe 20 years ago. 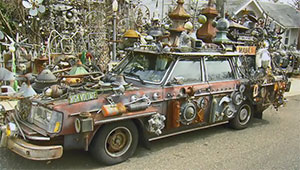 DEBOCLE… a 1946 Chevy school bus… imagine pulling up to late for class in this bad boy.

And the Flagship of Bedford’s 6 car fleet… an ’88 Ford Econoline… VANADU. Many of the objects sprayed with carburetor cleaner to give it a weathered look. 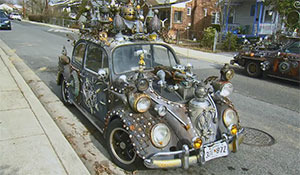 ZACH MASKELL: Springs, Lamp posts, and the occasional skull. Made up of things otherwise not valuable, the end result is meant to have sustenance… that’s what assemblage is all about.

CLARKE BEDFORD: “Most of the time people are really happy to see it.”

ZACH MASKELL: Checking my medical records… yes I’m up to date on my tetanus shot.

His cape cod style home, also known as Vanadu Art House is decked out mainly in recycled metals. He finds rusty bits from the street, visits junk yards, thrift shops and antique stores all across the east coast.

CLARKE BEDFORD: “Everything you make, everything you put somewhere, you’ve chosen. And it’s eccentric and it’s extreme but when I walk into it – it’s kind of enveloping and I like that.”

CLARKE BEDFORD: “ I like to be in a place that I find comfortable. 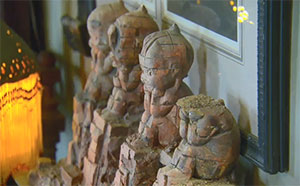 ZACH MASKELL: Step inside and feel Clarke’s passion for objects from the late 18 and early 1900’s. A period in art he’s fond of… late Victorian and the start of modernism.

WILLIAM SCHENCK: “My wife and I both love it. It was actually a big selling point for our house. Sort of a lack of that sort of expression in the area.

ZACH MASKELL: Clarke says our culture dictates that every one of our cars look identical. These mobile art galleries separate that… and suggests that not conforming is okay.

CLARKE BEDFORD: “I don’t think of myself as a car person, my father certainly wasn’t.

ZACH MASKELL: While admittedly not a mechanic either, he confessed his respect for rat rods and their a-typical expression. Off for a spin we go.

CLARKE BEDFORD: “You can already see the people wondering what’s coming down the road.” 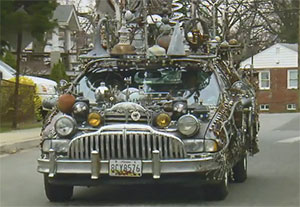 ZACH MASKELL: A 1995 Caprice Wagon… and his daily driver.

ZACH MASKELL: “It feels really nice. It’s got that classic ‘drives like a boat on air feel.’ Very Nice.

CLARKE BEDFORD: “That’s good, that’s pretty much what it is. It does have these cylinders in the rear springs, to lift of the back because of all the extra stuff on it.”

CLARKE BEDFORD: “A lot of time you’ll get people who say ‘oh you really made my day.’ And I sort of think ‘Oh gee. That’s great, but it’s sort of too bad also. Because your day shouldn’t be quite that limited.