As the story goes, the first racing “go-kart” was built with scrap, from scratch in California in the mid 1950’s. It was quickly cloned around the world, and today remains the foundation of modern motorsports. So, recently, our MotorWeek team decided it was time to freshen our competitive skills, and go over the edge with Zach Maskell, in the most up to date karts we could plug into. 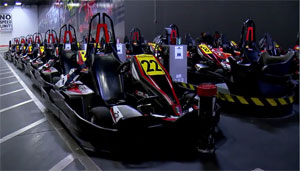 ZACH MASKELL: While professional sports teams, or an office full of suits may see this as an exercise in team building, our crew, is out for blood.

ZACH MASKELL: “I don’t know about you but when I see an empty warehouse, I think ‘Man, the possibilities are endless.’ Now you slap an Autobahn sign up there. Well, that just sounds like an invite to me.”

ZACH MASKELL: It’s a simple philosophy. No Speed limit! Named after the famous speed-no-issue motorways in Germany – we’ve come to White Marsh, Maryland to see how we fare on the Autobahn Speedway.

ZACH MASKELL: Safety dominates all forms of racing. This Grand Prix style track has some of the safest reflexive barriers made. And, these Italian-made karts have 4-point safety harnesses, dual disc brakes, and steering that really gives you a feel for what “raw” motorsports is all about. 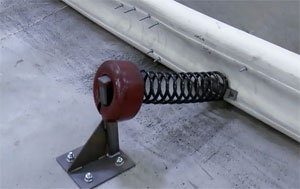 BRIAN: “The torque on these electric go-karts are just amazing, very responsive.”

ZACH MASKELL: “Many big names in racing got their career started in karting. Jeff Gordon and Lewis Hamilton just to name two. So, parents out there, if you think your kids might have a taste for motorsports, these karts can go up to 50 MPH. So, it,s a pretty good start.”

ZACH MASKELL: Not what you were expecting, huh? Well, the youth karts don’t go quite as fast. They can still hit 30 MPH… potentially molding your child, into the next Mario Andretti.

WILLIAM ROBY: “It just shows me the earlier that they start out, it’s crazy to see where they would be if they kept racing at my age.”

ZACH MASKELL: Not only can kids experience the thrills of high performance karts… they also learn they must obey the rules of the sport. These signal flags are direct descendants of the ones used in professional motorsports, so they’ll take in a lot more than they realize. 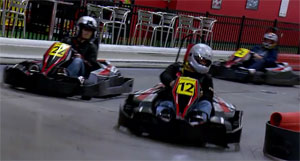 GREG CARLOSS: “The thing that I was most shocked about was that you still need to get some heat in the tires. And by your 3rd or 4th lap and everything is the temperature you want. You get the most grip, really. It handles a lot like a an actual car.”

ZACH MASKELL: I’ll call that an excuse for a poor lap time… while one of us used “racing” as an excuse to get even.

BEN DAVIS: “I love running fender to fender with my boss. I look over at him, he’s like… and I maybe just give him a legal tap here and there. And, the wind rushing in my face and I’m right on the ground.”

BRIAN ROBERTS: “These boys have skills. But, I was a little faster I think.” Show laughter after…

PATRICK LUCAS: It’s not about the numbers for me. It’s just about having a good time with my co-workers.” 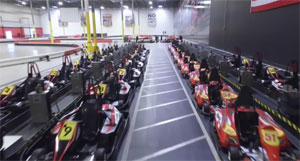 ZACH MASKELL: Even if you were forced to drive, you’d come out pleased.

BEN KONECHNE: “A Valentine’s day gift from my wife. She surprised me. My friend’s kidnapped me and brought me here. I had no idea.”

“I like these high speed karts because they’re so much more fun than, if you go to some amusement park.”

ZACH MASKELL: Well, our lap times were in, and a winner was to be crowned. But I’m pretty sure that staffer would prefer to stay out the spotlight and avoid all those naggy sponsors and interviews. I’m a pretty busy guy as it is.

ERIC EARHARDT: “Every kid or adult that comes through here that gets in the car enjoys themselves. And that’s the biggest thing this place does for people. Makes them smile. Makes them laugh.”