Our Over The Edge guy has been known to drive up and down the coast in a single weekend, whether it’s for kicks or to pick up the newest addition to his motorized stable. In the past, Zach Maskell used painters tape to protect the finish on his more treasured vehicles while on the road. But recently he ventured into one shop that installs an invisible force field. 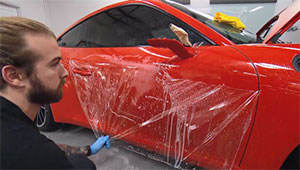 ZACH MASKELL: If there’s one thing that we cannot get enough of. It is protection for our cars. Today we’re in Forest Hill, Maryland at A-Plus Auto Styling. And we’re going to figure out how you can get a protective barrier for our paint.

A-Plus is a firm that specializes in preservation of your ride. From window tint, to full color vinyl wraps, and the ever so popular… Paint Protection Film, also known as PPF. This is a thermoplastic urethane film which is applied over paint.

PPF can protect against rock chips and scratches. Now if you want to cover the entire car, in our area it’s about $6,000. To do the front impact zone, it’s about 2 grand. And Xpel which guarantees it for 10 years.

ZAC RITTER: We had a customer with an F type have a driver scuff the bumper of his car leaving a parking lot one day. When he pulled the wrap off there was really no damage to the paint itself. It looked like there was, it was pretty bad when the film was still on there but we pulled it off and to both our surprises all we had to do was essentially replace the film. 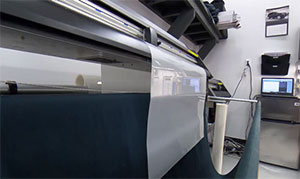 ZACH MASKELL: This blotter machine can precisely cut the PPF for many cars, so it’s not usually hand cut.

NICK KRAFT: These precut kits.There’s two different mirror designs.I cut the one with the smaller mirror hole out. Knowing that I’m going to tuck it as close to the mirror stalk as possible and not have any gap there so what I’m doing now is just trying to position it exactly where I want it.

ZACH MASKELL: While color vinyl is installed completely dry, PPF is a polar opposite.

NICK KRAFT: The idea is to not have any dry spots. Any dry spots can create silvering or defects in the actual glue so, got to make sure everything’s nice and wet.

ZACH MASKELL: The guys are making sure there’s no bubbles and no contaminant, as this is like holding a giant piece of fly paper. Then the water is squeegeed out and the edges sit to dry. 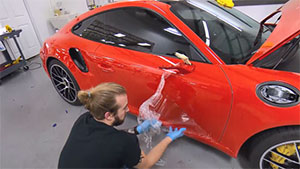 ZAC RITTER: It’s not the thickest thing. If it were too thick you would lose the ability to keep it from being visible. So I think they found a perfect niche with it about its effectiveness and aesthetic qualities.

NICK KRAFT: One of our favorite properties of the paint protection film is the self-healing top which. Which helps with light scratches, any swirls that you may get, maybe with a dirt microfiber.

ZACH MASKELL: The suns heat alone will pull these scratches out. But, you can use a heat gun to expedite that process.

NICK KRAFT: We’re not going to go too heavy with it but we’re going to basically make an area that’s got some scratches on it.

ZACH MASKELL: Voila! Magic. That’s how this Audi R8 owner feels… saying you can’t see even the edges of the film… which has kept his paint spick and span. 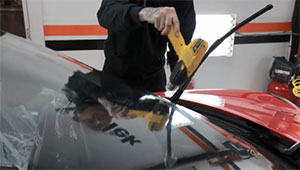 MIKE WYSONG: People compliment me all the time about how new the car looks even though the car is a couple of model years old. Aside from that that the car’s also easy to take care of and maintain.

ZAC RITTER: After you get the car PPF’d there really isn’t a whole lot you have to worry about maintenance wise. You can pretty much treat it as though you would have treated the car originally before you had the film installed. You can wax the car, you can get the car ceramic coated. Those two things, not in combination but either or will help prolong the quality of the film itself.

ZACH MASKELL: Don’t directly spray edges with a pressure washer. And while you can take it through the car wash, touchless is preferred. Now, it takes about 40 hours to properly install PFF over an entire car. So, it’s not a one day thing. And, ask around to make sure the shop you choose has a good reputation. But, for anyone who really wants to keep their car looking like new, PFF is a worthy investment.