Home » Features » Over the Edge » Building a Corvette Dream

You know every car enthusiast has a dream. If you're a Corvette lover, you might see yourself on the factory floor building your own car. Well now Chevy is actually giving some owners a chance to hand build a part of that dream. The part that is under the hood. Our Over the Edge guy Steven Chupnick just couldn't resist the opportunity.

On June 30th, 1953 a phenomenon was born – the Chevrolet Corvette. Only 300 were built in that first run, by hand in Flint, Michigan. Since then, things haven't changed much. The Corvette is still one of the most iconic sports cars on the road and a large part of it is still built by hand.

In the early 1970's, Chevrolet introduced the ZR-1 package, and today, that recipe is a full-fledged American super car and its engine is a 21st century push-rod marvel. With a new opportunity from General Motors, you can have the experience of a lifetime building your very own LS9 – the granddaddy of all engines.

JOHN FITZPATRICK: Be able to open the hood, look at the engine, look at the block and say, 'yep, there's my name. I was a part of that build.

If you're in the market for a new ZR-1, you can participate in GM's Corvette engine build experience. General Motors knows how loyal and passionate Corvette owners are.

JOHN FITZPATRICK: We're talking a group that is very energized, they're very enthusiastic...they want to be a part of their car as much as possible. In a lot of ways, the engine build experience is the ultimate being a part of your car that you can get – to be actually a part of the assembly of the great LS7 or LS9 engine.

For a preview, I had the chance to get on the assembly line at the performance build center in Wixom, Michigan and help put together one of the most amazing engines in the world .

This truly was an awesome experience for me, which is exactly what General Motors wants out of this program. And that starts as you walk in the building.

Being here at the performance build center and participating in the Corvette build experience is not only about being on the floor building your own engine, it's about being treated like a V.I.P. And a V.I.P. is what I felt like as I began the process of installing the pistons – which is a task in itself.

Each station at the performance build center is set up for a different section...these highly skilled workers took me around to show how to hand build each and every engine. 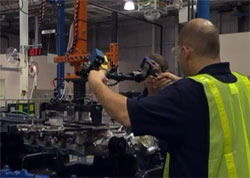 And what an engine it is. The numbers speak for themselves – the mighty 6.2 liter supercharged V8, 638 horsepower and 604 pound-feet of torque. And remember it still uses push-rods, when all its European competition has gone to overhead cams. You could call the Corvette the king of push rods.

For me, just having a piece of the action was incredible. From the exhaust manifold, the flywheel, the clutch assembly, the coil packs, to the coolest part – the supercharger. And underneath the supercharger cover is the intercooler.

A lot of bolting and torquing goes into the build, but nothing prepares you for the 15-piece torque pressure machine.

BRUCE BLOMFIELD: I'm excited...it gives me chills just to think about it; the excitement of interacting with the builders, the people who build their own engine. Think about it - they're building their own dream, so I'm excited for them. 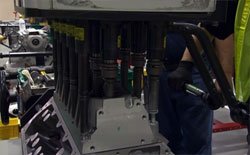 These engines are in perfect condition. It doesn't matter who is building them, they go through every possible inspection before leaving the plant to head down to bowling green to be put into the corvette bodies. And if you're wondering, your warranty is fully intact even if your name is on the block.

So the next time you see a ZR-1 on the road, the person who is driving may not only be living out his dream behind the wheel, they might have put their money where their mouth is – under the hood.