You know, not too many people can say they painted a car before their 13th birthday. But a man who needs no introduction… did just that. Working with his father at an early age… it was evident that designer/fabricator Chip Foose had a gift. Hailed as a hot-rod god, his work has been featuring in many popular films, and he even helped design a casino. Our over the edge reporter Zach Maskell hung out at Foose’s shop… and checked out the set of his hit TV show.

ZACH MASKELL: Scattered tools… freshly sanded dust in the air… the buzz of a welder. The attention to detail is staggering. Long days turn into a long night. It’s here where masterpieces seen worldwide… are created. 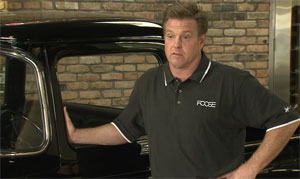 I am in the presence of the man. He is a living legend. You probably know him. Mr. Chip Foose.

ZACH MASKELL: Thanks for having us.

ZACH MASKELL: Can we check the shop out?

CHIPE FOOSE: You sure can. Come on in.

ZACH MASKELL: Chip’s shop isn’t far from the sand in Huntington Beach, California. Growing up in Santa Barbara, when most of his friends were surfing, Chip was at his father’s shop. By age 7 he’d spend most of his time there learning the tricks of the trade. A 2 wheeled obsession also started… At one point he had 40 bikes on the side of his house. But once he turned 16… it was all cars.

CHIP FOOSE: This is actually the first car I ever owned. My father bought this truck in 1968. And I bought it from him in 1978.

ZACH MASKELL: That same truck was used to rebuild their house. Ever since his father owned it, it’s been very well known. And soon after… he met his wife, Lynne.

CHIP FOOSE: I need her expertise and hopefully she needs mine.

ZACH MASKELL: In 1998, Chip and Lynne started Foose Designs. From there… it never stopped growing. 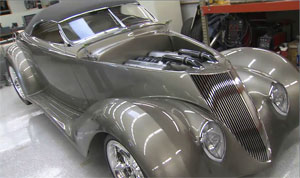 When I think about a Foose car, the Impression is definitely one of them. And this thing just looks ways better in person than I’ve ever seen in pictures.

CHIP FOOSE: Well thank you. This car is completely built from scratch. We did not start with an existing car. I actually did sketches on paper first; then we built a scale model; we sectioned that model, built a full size wooden buck and we hand shaped the entire body and every single piece that’s on this car.

ZACH MASKELL: And here we have what you said you’re going to call the Impostor. A 2008 Corvette in Impala clothing?

CHIP FOOSE: Well we actually, in 2009 we bought a brand new Corvette from a lot 2 blocks away, drove it in here, peeled the body off. We are keeping everything from that Corvette on the chassis. The electronics, every single electronic motor, everything that was on the Corvette will be run in the Impala. 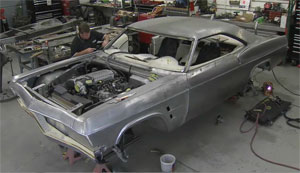 We’ve shortened it 14 inches; we stretched the chassis almost 8 inches. The we also pulled the top forward 7 inches, laid the windshield back another inch, brought it down and inch and a quarter.

ZACH MASKELL: Whether they’re TV stars… or just regular Joe’s… if you can dream it… Chip will do it. He also stays busy with his hit TV show, Overhaulin’. With family members in on the plan… a deserving persons old and beat up car is stolen by the Overhaulin’ team. Chip draws up how it’ll look… and dreams are made reality when the completed project looks better than the car did brand new.

You may know our MotorWeek Cadillac Deville we’ve restored. But now it’s time to see it Foose-isized. 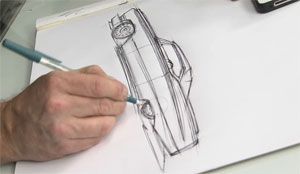 CHIP FOOSE: Right now we’re just going to do a sketch and have fun with it.

ZACH MASKELL: When Chip was growing up, he’d sit next to his Dad and copy his drawings.

CHIP FOOSE: I’m not interested in drawing something that exists. I want to create something to give people another perspective. Another way to look at something.

ZACH MASKELL: Chip’s drawings can take him between 45 minutes… to 10 hours… with no breaks.

CHIP FOOSE: Especially when I first went to art center, I always had the TV and radio on. I didn’t like it real quiet. Couldn’t concentrate.

ZACH MASKELL: So you concentrate better with noise…

ZACH MASKELL: Chip looks at new and old cars for inspiration. Products in a department store… even the layout of an airplane give him ideas. And… he still loves doing it. That’s why he’s earned a spot in the Hot Rod Hall of Fame… among dozens of other awards…

There she is. MotorWeek’s Cadillac Deville, Chip Foose Style.