Now-a-days it seems we all need to stay constantly connected, whether it’s with the office or with our families. Unfortunately, staying connected in our cars has many of us seeing red. Now, lots of us have tried some form infotainment communication technology. Steven Chupnick gives us an inside look at designing the devices that keep us connected.

STEVEN CHUPNICK: ‘There’s an app for that.’ We’ve been hearing the phrase for years now, but with states mandating the use of hands-free devices in your car, it’s never meant more. So, drivers are turning to other tools to help keep them linked to the world while maintaining safely on the road...

Most new cars today are available with an infotainment system, information such as weather and traffic updates, as well as a portable music source. But if you have an older car or you don’t want to deal with the often expensive factory options, there are aftermarket companies available to help you get connected to the latest technology.

Among units from Alpine, JVC, Pioneer, and other familiar names, a digital media receiver that caught our eye is the Parrot Asteroid. We spoke to the Parrot company through another expanding technology – Skype, from their headquarters in Paris, France...

FREDERIC ALBINET: The purpose was to bring the internet connectivity into the vehicle, that was kind of our revolution.

STEVEN CHUPNICK: Parrot has been a pioneer in bringing the internet inside the car, and they’re continuing that legacy with the Asteroid receiver, based on the android operating system.

COLEMAN BENNETT: Parrot puts a lot of time and effort into their systems they put out here; they’ve been innovating it for 15 years now. 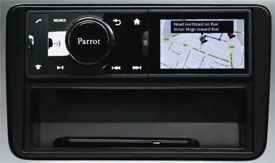 STEVEN CHUPNICK: Designing the Asteroid was a 4-year intense process, implementing a full car receiver with weather, traffic and map applications as well as Bluetooth capability...the same as in your iPhone or other smart phone.

FREDERIC ALBINET: It’s more about, you know, voice activation, noise cancellation, more towards music, web applications – stuff like that. So it’s kind of that technology based on our experience, let’s say, the core business of Parrot, which is mostly hands-free connectivity and all the new, kind of, applications.

BEN DAVIS: The coolest thing about it is you can stream Bluetooth audio; you don’t even have to take, for instance, my iPhone out of my pocket.

STEVEN CHUPNICK: The Asteroid with its TFT video display fits right in your dash; it is designed to replace a typical factory stereo in older cars.

BEN DAVIS: Let me show you what I was rockin’ on – this circa ’94 Chrysler bad boy, right here. It just doesn’t kick out the jams like this Parrot unit does.

STEVEN CHUPNICK: Another avenue is to add infotainment capabilities to your existing stereo system. That’s what parrot’s MK-I unit can do. Again, the display and voice activated controls allow the driver to never take their eyes and hands off the road. 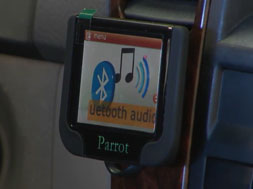 MICHELLE ROBINSON: For me, the best feature is the voice command, so I can call my husband or call work without having to pick up my phone and try to find the number.

COLEMAN BENNETT: 15 years ago, I’d never think my phone would be talking to my car. But what can you do?

STEVEN CHUPNICK: So what is the future of the connected car?

BEN DAVIS: Ideally, I would like it to pull up a Starbucks app and order me a Starbucks so I don’t even have to - I can just roll in and grab a Starbucks, every morning at a specific time, I’d just program that in.

STEVEN CHUPNICK: Ok, so maybe we can’t have it Ben’s way – it’d be nice, but that’s still down the road. But the way in-car connectivity is going, it could happen and soon!