In 2020, the Land Rover Defender returned to America with a thoroughly modern makeover; we called it a “new Defender for a new age.” But it turns out that a lot of people want an old Defender for a new age. So, this week Greg Carloss revisits our friends at ECD Automotive Design where their quest is to meet that demand.

When we first met the ECD team a few years ago they were a relatively small company breathing new life into derelict Defenders. Well since then they’ve grown and they’ve got a few new tricks under the hood. 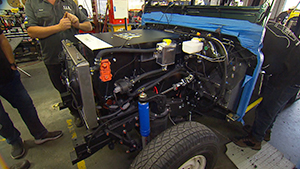 Back in 2013, Scott Wallace and his ECD co-founders started building dream Defenders in a small Kissimmee, Florida garage.

GREG CARLOSS: A quick tour of their current digs reveals a flurry of activity from a dynamic crew of highly-skilled craftsmen.

SCOTT WALLACE: We run 20 departments and each vehicle is in each department for 4 days.

GREG CARLOSS: It takes around 110 days for these Defender Menders to turn this into this. But that’s nothing compared to the 8 month design process, where clients choose every single detail of their truck a la carte.

This eggshell-finished Keswick Green Defender 110 is my own creation. 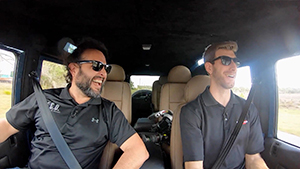 Assuming I had a few hundred grand to burn in my fantasy world, I went all out with a mixture of modern and old school touches.

As far as the powertrain, well remember those new tricks I mentioned earlier?

RYAN LEAVERTON: We have a Tesla Model S drive unit out of the rear of a Tesla Model S turned 90 degrees and re-geared to run the driveshafts directly so we still have all-wheel drive.

GREG CARLOSS: Sure, I could have gone with one of the many V8 engines ECD offers. But even in my fantasy world, gas is expensive.

ELLIOT HUMBLE: Hi, I’m Elliot Humble, one of the founders at ECD, and this is project Morpheus.

So, this is a giant battery box, as you can see. Engine’s gone, transmission’s gone. So, we’ve got a big old battery up here. A big one at the back and that’s pretty much our drivetrain.

GREG CARLOSS: The result is 450 horsepower and 220 miles of driving range. 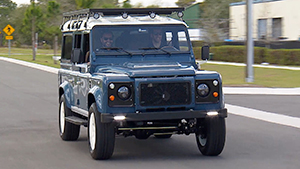 JOHN PRICE: Exactly right. You know the main thing is that we’re not turning a Defender into a Tesla. All we’re doing is keeping the character and feel of the old school trucks, but with a powertrain that’ll give you all the efficiency and performance that comes with the Tesla setup.

GREG CARLOSS: Do you ever just sit there in some down time and make some dream Defender for yourself?

JOHN PRICE: Every now and then. It’s uh--

GREG CARLOSS: Well you gotta dedicate yourself to the process. You know, do some research.

GREG CARLOSS: Would you mind if I stopped and went from a stop?

JOHN PRICE: Not at all.

GREG CARLOSS: Alright, from a dead standstill, let’s see how it does-- alright, two hands might be better.

I don’t have a timer on me, but I think I can attest to the 0-60 in about 5 seconds, which, when you look at this thing on the outside, is ridiculous.

SCOTT WALLACE: I don’t think we just sell a vehicle. I truly believe our clients come on board because they’re getting an experience. Really, they’re just commissioning us to build their dream vehicle. So, it’s pretty cool. It’s been a pretty remarkable thing we’ve built here.