Home » Features » Over the Edge » Dirtbiking

If it’s got an engine or wheels… you’ve already caught our attention. Add a bunch of uneven turf into the equation… the eyebrows on our over the edge guy’s face, lift to the skies. So, toss on your boots, and let’s ride with Zach Maskell on some pre-mix ponies.

ZACH MASKELL: This is not a store. It’s a private collection, sitting on the cuff of 300 acres in Whiteford, Maryland. Some would question… why. Others… already know the answer.

JEFF PHIPPS: “It’s a feeling of freedom to be able to start your bike and take off and just go.”

ZACH MASKELL: Jeff Phipps starting riding when he was 11 years old. This collection of over 100 dirtbikes… began just four years ago. Both Jeff, along with his son Ryan, had plenty to share. That’s an understatement. These guys are self-taught experts. They acquainted me with a famous bike…a two-stroke whose brand you’re probably familiar with. 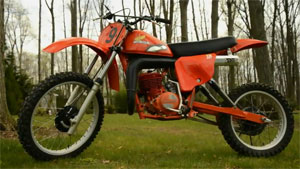 “Soichiro Honda said that his company was never going to produce a two stroke motocross bike. Well, not a couple years later, that’s exactly what they did, with this right here, the Elsinore. It completely changed the motorcycle game for the entire world.”

While Honda was doing well with four-strokes… they knew they needed to stay competitive. A secret team designed the two-stroke and presented it to their leader. He approved the idea, but only if his team guaranteed a winner. This was the beginning of the Japanese brand take over. The Elsinore was favored by many… and this lead to a 34-year run of 125 and 250’s.

“What was it that Honda did differently with this two stroke? Why did so many people buy it?”

JEFF PHIPPS: “Raw power. And it was dependable that year. The earlier ones weren’t so dependable. But I drag race this bike and I’m 220 pounds and this thing rips and it’s all stock.”

ZM: Yes, Jeff and plenty of others are still beating on this beauty created in the 70’s.

“IT’S JUST GOT SO MUCH POWER… AND IT DELIVERS… HAHAHA…RIGHT WHEN YOU WANT IT!” 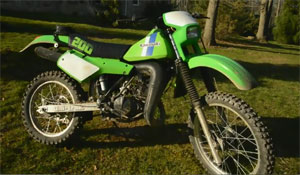 I had to put the Red Rocket down, and move on to a couple other popular choices back when dirtbikes were becoming mainstream.

If you don’t recognize this one… then you never looked in any magazines growing up. The Kawasaki KDX 200 is a do-it-aller. And even now, you can ride it all day long and still have energy left.

“I would believe you if you told me this bike was made just a few years ago.”

ZM: “This thing… not bad at all… that one is prehistoric, it’s unbelievable.” 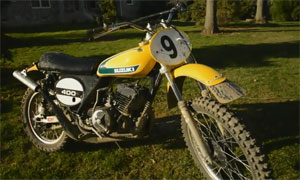 ZM: This was a motorcycle that was known for tossing riders off at will. It had the power… but was simply unpredictable. It probably holds an unwritten record for most bones broken.

“So the Suzuki TM400… Ralph Nader would probably write a book about this… Unsafe at any Speed. But this isn’t the year, this is a little better than the prior years…”

ZM: “And that had to do with the ignition?”

JEFF PHIPPS: “Yes, the ignition and some poor timing but this bike was fixed in ’74.”

ZM: “So we’re going from what year to what year?”

ZM: “And that is a huge difference…”

JEFF PHIPPS: “Yeah this will beat you to death.” 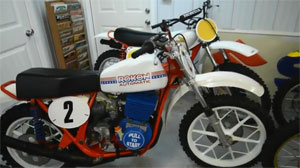 ZM: The changes dirtbikes saw in one decade, is like horse and buggy to the La-Ferrari.

Of course, the sport hasn’t plateaued… but designers really did figure it out in the 80’s. Longer traveling suspension, comfortable seats, and better handing.

Jeff’s favorite of his collection? Some short lived Vermont based automatics.

ZM: “Lesson learned today… respect your elders or…” or get roosted.