Home » Features » Over the Edge » Down Hill Go Karts

"The most fun is usually had on the outskirts of sanity, somewhere between brilliance and mayhem." Well, that’s quite a motto. And it fits a very special group of racers that make cheap thrills their priority. Well, our Over the Edge guy Zach Maskell naturally signed up, ready to go downhill racing, with gravity as his copilot. 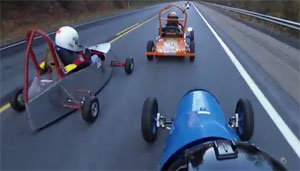 Daredevils whose ages range from their 20’s to 60’s… race soapbox cars once a month around central Maryland back roads.

FRAN HONEYWELL: “A lot of people look at what we do and their first reaction is ‘oh, that looks like so much fun.’ And it’s really not fun. It’s terrifying.”

ZACH MASKELL: These are not your pampered, fragile, downhill derby cars. These are welded metal frames, prepared for top speed runs, and serious crashes.

Fred Schroeder knows all too well, the dangers that come with hitting 70+ miles per hour.

FRED SCHROEDER: “I vividly remember some event happening and saying to myself “I’m not going to recover from that.”

ZACH MASKELL: Fred made contact with another car, then hit a tree… going from 60 to a dead stop… in under one second. 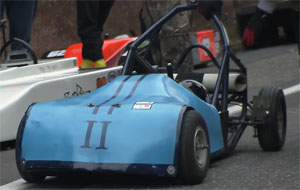 ZACH MASKELL: Thankfully, another member, who’s also a paramedic was in their trailing safety car and was able to render immediate assistance…That’s Chris. Everyone in his house races gravity cars. His wife has actually bumped into him, forcing him off the road - more than once… ruining HIS chances of a win.

REBECCA SASS-CREWS: “It’s a very family-friendly atmosphere. It’s like one big happy, kind of screwed up family in its own way.”

ZACH MASKELL: The Maryland Independent Soapbox Federation and Incline Trails Society… or MISFITS, used to be an “illegal” activity. That’s what started everyone’s racer name like “Shark Bone” and “Tin Man.” Many of the cars they drive are built at Fran’s house… next to his Porsche 911 and Austin-Healy Sprite… 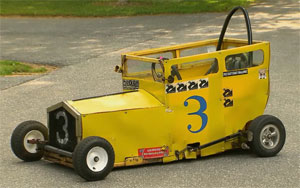 “These things are almost scary. For me, that means there’s a lot more risk involved. And that means, there’s more fun! So what we’re going to do today is get me fitted in this kart right here, and see if I can’t make my way through the East Coast Challenge.”

Drivers from across the country make the trip to the Mountains of Pennsylvania, hungry for the ECC trophy. I’m running against novice drivers… and needed to see what I was dealing with. We headed over to Fred’s house… where the group has cookouts and races on his backyard track. I found all the cars have a 5 point harness and roll bars… even arm restraints are recommended.

MAN HELPING: “We want to make sure if things get out of shape that your arms won’t be flailing around.”

ZACH MASKELL: “I feel like I’m in my own loony bin.”

It’s funny I say that… because their online forums are called the Asylum!

“Alright! It’s time for the bunny hill. Let’s give her a shot.”

A few pointers later, and I was off.

“This is quite the rough ride. But it’s good because you can feel everything in the road. You know exactly what the car’s going to do and when.”

Before I knew it… it was the weekend… at 5 AM and time to rock. I checked out the hill before take-off.

“Wooeee this is going to be one crazy day.”

There’s four different classes in the lineup, the fastest being these super cars. They hit speeds over 80… miles… per… hour. 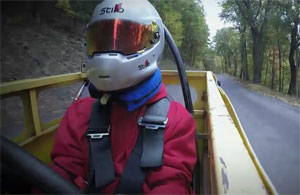 With the cops on our side, we shut down 6 roads and I raced in 5 of them. I felt petrified, yet weightless, whizzing past trees at an infant’s eye level.

“That speed limit sign says 40… we are definitely doing more than 40!! She almost wrecked!! Woo-hoo!!”

Coming from someone who’s raced around tracks like Talladega SuperSpeedway with 800 horsepower under the hood… this is hard to argue.

BARRY FITZGERALD: “This is the ultimate extreme feeling of going fast, in my opinion.”

ZACH MASKELL: The winners got some humorous trophies… and I placed 7th out of 10. Not bad… considering the car I used has previously been crashed more times than my computer.

Despite the competitive nature, it’s all about a good time – something this group has perfected.