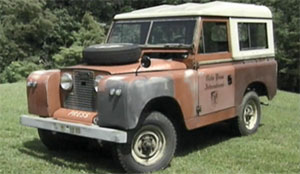 A boxy SUV from Britain was the first car over half the world ever laid eyes on. The iconic Land Rover is loved by many, including farmers and even the Queen. One company state side is keeping those trucks alive, and beyond today’s standards. Time to go Over the Edge with Zach Maskell as he takes command of a Chevy powered… Defender!

ZACH MASKELL: The Land Rover Defender’s roots date back to 1948 with the Series One. Introduced in 1983… under the Defender name… the light ute is used for military operations, fighting fires, camping, and much more. It was only offered in the US of A for four years. Production ended in 1997, but E.C.D Automotive Design in Kissimmee, Florida is refusing to let them die.

SCOTT WALLACE: Although we didn’t meet until 5 years ago, our upbringing was very similar. We were from pretty poor backgrounds in working towns in the U.K.

ZACH MASKELL: After moving to the U.S. and quickly selling the two Rovers Tom imported, a light bulb went off. The bread and butter of the show… a Defender 90, and 110. 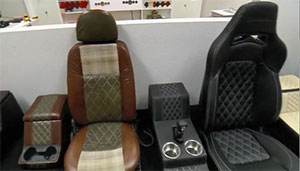 ELLIOT HUMBLE: Just like restoring any old Corvette, any old Toyota FJ. You want to start with that actual vehicle. We don’t want to build kit cars. We want to restore Land Rovers.”

ZACH MASKELL: Salt, sun, and rain work together to breakdown the aluminum body and steel chassis parts on these UK imports. Rusty and corroded– point of no return parts are scrapped here at the acclaimed “Rover Dome”… during step one.

This is a good time for the buyer’s door hinge to be removed and framed for memorabilia.

ELLIOT HUMBLE: It’s like Grahm’s truck. I mean that’s got 30 years of history. We have a folder this big and the guy kept every single MOT test from England, every service, every little repair that was done. He kept every one of them. 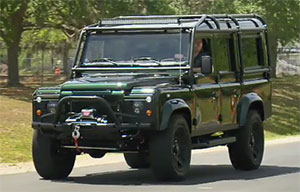 Unlike a Mercedes-Benz G-Wagon or Cadillac Escalade, these trucks are not generics off of an assembly line.

SCOTT WALLACE: The base truck has still got that story. That’s what we’re selling. I don’t think we’re selling just the vehicle. We’re selling a journey of how you custom build your own vehicle.

NICHOLAS YEARICKS: These are our mood boards. These basically lay out the description of the customers exact preferences on their individual build. What makes their truck custom is all on this sheet. They’re custom tailored to their specifications.

ZACH MASKELL: Apart of ECD, East Coast Overhaul. Let’s say you’ve already got a Defender and you want to put a new engine in it. Come in here, you can do a LS3 Corvette engine, you can do the same 5.3 liter that you can find in my Chevy Silverado truck and you can probably do just about anything else that you want to. 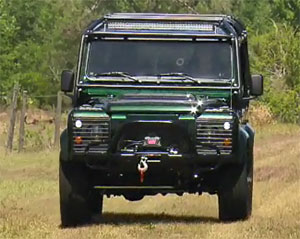 RYAN LEAVERTON: The original engines in these were anemic at best. You had a 4 cylinder turbo diesel, which made like 80 horsepower or something like that or you had a 3.5 liter v8 which still made about, nothing. So it doesn’t really suit people’s needs on American roads and trying to get up to highway speeds so what we do is we swap out to reliable Chevrolet products.”

So here it is fresh out of the factory, this 110 is an NBA players, Kent Bazemore, and we’re driving it before he even takes delivery. He wanted carbon fiber trim, with a very modern two tone, and of course there is the honey comb stitching on the seats.

Everything is up to date like this touch screen infotainment system, a backup camera and wireless charging for your cellphone. Under the hood is the heart of a Corvette. 565 horsepower LS3.

For 180 up to 300-thousand dollars… you get rid of the cold, metal interior, and into something bespoke. But you won’t forget what you’re driving… with heavy steering and off-road ready suspension. Considering what these three British best-friends set out to build, these Defenders deliver.