Most consumers understand that electric vehicles reduce the use of petroleum and improve the environment. But, they don’t always understand the performance advantages of driving pure electric. Well our Zach Maskell has caught up with a group of enthusiasts who have taken their lightning fast EVs over the edge.

ZACH MASKELL: When you hear “drag racing,” this probably comes to mind. Nitro methane breathing monsters with thousands of horsepower. With that brings fire, noise, and pleasant smells. Now picture this… no ear-plugs, less carcinogens in the air. Just tire squeal and some gear sound.

Everything is bigger in Texas, like the power out of this Miata… compliments of Lonestar EV Racing Team out of Houston.

Could it be… 1.21 gigawatts that powers this thing?

ADAM CLARK: No, no it’s not. It’s actually 700 kilowatts which is about 800 horsepower. And that’s about the same as a blown big block V8.

ZACH MASKELL: You’re looking at a battery powered Volkswagen Bus, the first Nissan Leaf sold in Texas, and… “Assault and Battery.” One of the quickest Miatas you will ever see. It’s guilty as charged… putting a serious beat down on most challengers. It drinks no gasoline… as it’s powered by 120 lithium iron phosphate batteries, like the ones in many power tools….

So this conversion car is really not that much different from the whole set up that originally came in the Miata. 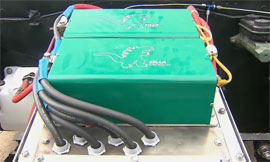 ADAM CLARK: That’s right. So we still have the transmission and the rear end. Still rear wheel drive just like the original Miata. We just took out the gasoline engine and put in an electric motor. So in this particular set-up we have two electric motors underneath and two controllers here on top. One controller for each motor.

ZACH MASKELL: The best part about all this is… the torque is instant. The motors don’t have to build up RPM’s like in a gas car. There is fifteen-hundred pound-feet to the ground… The moment the pedal is pressed. 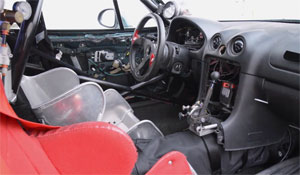 A couple of times a month, these guys get together and hit the track. They’ve been big players in the sport for about four years. It started when team member John Metric first saw an all-electric snowmobile in Canada. From there an obsession started which lead to the Miata… whose life begun with the team as a rolling tube chassis. It would actually be street legal if it had a couple parts like windshield wipers.

ADAM CLARK: There’s us and then there’s dozens of others like us. We’re just small shops trying to build fast cars and having fun with it.

John you guys have been shattering records… what do people say about this thing… what is the most common remark you get?

JOHN METRIC: Most people’s mouths just drop open and they cannot believe what they just saw. I mean we’re going up against all the street legal cars and some dragsters, and some rail dragsters, and we’re keeping up with them. 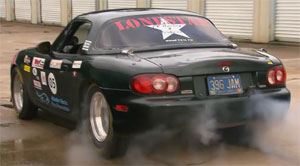 ZACH MASKELL: You have to do the same amount of tinkering with this thing as you would any other racecar right?

JOHN METRIC: I would disagree. I am shocked at how little I have to do to the car after it’s set up.

ZACH MASKELL: But, instead of shelling out about a hundred dollars in racing gas, it costs John and company about one dollar to refuel.

But does it do donuts?

Yes. Yes it does.

A quarter mile in 8.9 seconds. Not even the fastest supercar does that. This has got to be one expensive weapon right? John says fifteen-thousand dollars will get you a fast car… and 30-thousand will have you breaking records.

We headed out to Royal Purple Raceway outside Houston, to blast off. We’re about to do zero to 60 in 1 and a half seconds.

This is the fastest EV extreme street door slammer in the world… proving that battery packs are no slouch on any kind of pavement.

And, watching John should convince even gasoline diehards that going for an all-electric drive doesn’t mean you have to leave high performance behind.