Electric vehicles are best known for their efficiency and environmental friendliness, but simply say the words “Ludicrous Mode” or see cars like this Porsche Taycan and you’ll quickly learn that performance is a big part of the EV equation too. Well recently our Over the Edge reporter, Greg Carloss got a chance to sample an EV that takes high performance out of the commuter lane and onto the fast track.

GREG CARLOSS: Many racing fans come out to the track simply for the sound of the cars. But this race team generates a buzz by making hardly any noise at all. 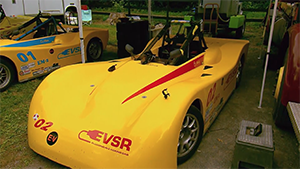 GREG CARLOSS: Charlie’s cars were, like most, powered by internal combustion engines, that is until the idea of the Electric Vehicle Sports Racer or EVSR program came about.

CHARLIE GREENHAUS:  In 2013, we had a customer who was interested in seeing a project like this happen. So we decided to take him up on his offer...and within three months, we had a car on track.

GREG CARLOSS: The first generation was based on a popular Sports Racing car; heavily modified to make room for the power plant and battery packs. But in 2020, Entropy introduced this second gen car with a complete redesign of the safety cage and battery container as well a brand new, single piece body designed and constructed in-house at their Pennsylvania headquarters.

CHARLIE GREENHAUS: Right now it can, in qualifying trim, run about 220-225 horsepower. It weighs 1,850 pounds without a driver...longitudinal motor...And we’re running a 27-28 kWh pack with lithium ferrous phosphate...

GREG CARLOSS:  Here on Summit Point’s main circuit, there’s enough juice for about 25 minutes of racing, which they pull from these level-2 chargers.

BOB CRAWFORD: They can run with anybody. And they run with a rule set that we created for them to run with the SRFs, the Spec Racer Ford, traditional SCCA class, but also in bracket where you get a mixture of big bore cars, big V8, ground pounder cars, Miatas, and you name it, it’s all out there and they can run equally with any of them. 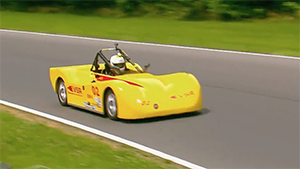 MIKE WILSON: Well it’s a completely different experience, but if I had to compare it to something that’s slower than us, but kind of like a spec Miata...It’s a momentum car. Holds a lot of G’s. Corner speeds are good...in qualifying today, I have a V8 NASCAR truck behind me and there’s a modern GT Mustang. Both of them sound great, but I’m willing to bet that at the end of the race today, we will finish ahead of them.

CHARLIE GREENHAUS: One of the surprises early on was that we could hear our competitors so well that we could make decisions and hear their intent in the car...as soon as he lifts, we know we can take the corner and we can own it.

GREG CARLOSS: When you put your heart and soul into building race cars from the ground up, they become your children, which means you get to name them. Behind me is “Ohm” and I’ll be driving “Blinky.” Ironically, putting on all the safety gear always makes me uneasy, but behind the wheel I’m charged with excitement. Feeling good. Confident. But not too confident. Just the right amount of confident. And out on the track that confidence grows as Charlie and I carve up the course. Charlie was not kidding. It’s very easy to drive...and there’s just no roll. I mean this thing is a race car...that’s just flat out through there. Don’t get to do that very often. And there goes Charlie...so clearly these cars have a little more power than I’m getting right now. Still, these aren’t 0-60 sprinters, they’re bonafide road course racers. And, after a quick victory lap...Woohoohoo! Yeah! It was time to climb out and plug-in.

CHARLIE GREENHAUS: What’s that? You want one? 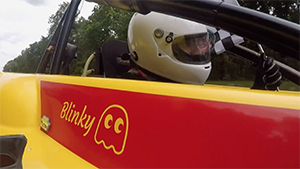 GREG CARLOSS: I want one!

CHARLIE GREENHAUS: We can arrange that! Pull off that helmet and let’s sign the contract.

GREG CARLOSS: With three more currently being built, Charlie plans to rent and even sell his cars; all while promoting EVSR’s core mission.

CHARLIE GREENHAUS: Plug it in, kick gas. We’re really happy. Early on, we weren’t very well accepted and as time has gone on and we finished race after race, people are understanding that we are just part of the racing community and we’re an important part, but it’s going to grow. And it’s going to keep growing.