Not a soul at MotorWeek would ever turn down the opportunity for a true driving adventure. So when our Over The Edge guy Zach Maskell got the call, he jumped on a jet and headed west to “explore” one of the most beautiful places on earth.

ZACH MASKELL: Roaming unknown territory is what I’d prefer to do every single day. Perhaps it’s a childish dream… to continue exploring the unknown… and stop my brain from wondering so much. But I’ll never stop. And I don’t think one American auto maker will either. Celebrating decades of helping families do just that… we joined Ford on their Platinum Adventure Tour.

“We’re at the Colorado National Monument. Right now I’m standing on top of the best-selling SUV in the class for the last 25 years. That’s right this is the Ford Explorer. This is the sixth generation and they’ve invited us on part of their 2,800 mile long trip to check it out and see how it does.” 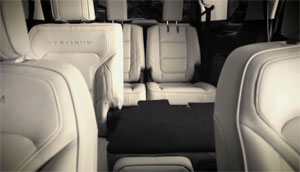 The Explorer still exists for one reason. Families keep buying them!! Ford has sold over seven million of these SUVs. How many adventures does that tally to? Well your guess is as good as mine… but I’d say… a… truck… load of em’.

Omar Odeh: “A majority of the customers that are buying the new Explorer are family adventurers. Customers that want to buy this vehicle for its capability, on road, off-road, as well as the spaciousness in the vehicle. Being able to carry seven passengers and being able to do all these weekend activities they want to do.” 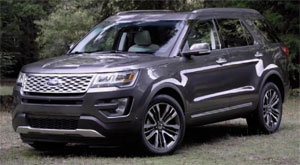 Ford brought us about 250 miles west of capital city, Denver, to Grand Junction. Among many stops… we’ll be making our way from here… to Montrose… then cruise the million dollar highway just past Ouray… and eventually and hopefully… end up in Durango.

“Here we are now just east of Montrose. It’s the Black Canyon of the Gunnison. We came down some 16% grades to make it to this here resting point. Legend has it that it got its name because certain points of the canyon are so narrow the sunlight will never reach the bottom.

There’s no easy way in or out of here. To find yourself at the bottom of a Canyon, you’re going down some steep stuff. As sporty as the vehicle is… it’s still a 2 and a half ton SUV. That being said though, it handled the switchback turns no problem, while giving us plenty of leg room. 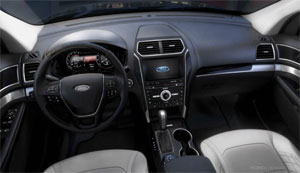 “I’m really enjoying driving this new Platinum Edition Explorer. It’s got quilted looking door inserts, it’s got leather wrapped arms rests. And for the first time ever… Ford did away with the blue oval in the middle. What they did was replaced that with brushed aluminum so it matches the interior a little bit better. Definitely a good move Ford. Also, I’m a big fan of the massaging seats.”

This is easily the most luxurious Explorer yet. But it’s more than just a pretty face. The 3.5 liter EcoBoost V6 shells out 365 horsepower. Even with the high elevation… the power was plentiful and comfortably got us to one of the… loudest spots. AKA, the Ouray Fault.

“That’s a big waterfall right there. I’m not going to tell you it’s deafening but it’s pretty loud. Basically, millions of years ago there was a big crack in the middle of the Earth. It came up and created this beautiful scenery.” 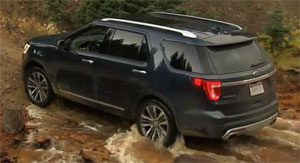 If you don’t like heights… I don’t recommend trekking out here. But the stunningly vast landscape could make up for that. There’s over 300 trails… making this a paradise for off-roaders. Although Telluride is only 10 miles away… the severe terrain makes the drive about 50 miles!!

U.S. Route 550… between Ouray and Silverton… is known as the “The Million Dollar Highway.” Its rocky cliffs are daunting, but I do know this is a lot less stressful than the miners had it in wooden buggies back in the day.

Omar Odeh: “We knew that customers wanted something more. And that’s what Platinum really delivers. The best of limited, the best of sport. All in one.”

ZACH: You may not see the current Explorer as an extreme off-roader… but if you claim 4x4… we’re going to give it a go. And yes… The Ford Explorer is a well-suited companion should you choose to take the path less traveled.