Home » Features » Over the Edge » Formula 3 Racing with Cameron Das

Researchers say we do a lot of our best thinking when we’re asleep. But if you don’t take any action when you wake up, well you’re not really chasing your dreams. Our Zach Maskell tends to go over the edge when he’s catching his z’s…like driving an open wheeled race car? Well…it’s time to witness that dream come true.

ZACH MASKELL: In the USA, many know racing as NASCAR, or the Indianapolis 500. For the rest of the world… it’s mainly one letter. One number. F1. No fenders. No windshield. One seat. To drive an open-wheeled F1 car competitively is the crown jewel of racing… the winners seen as royalty.

A trip to Summit Point Motorsports Park in West Virginia is where we found one driver practicing, determined to stand in the number one spot. 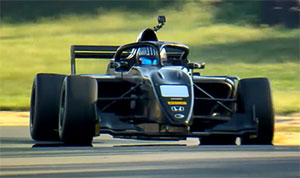 ZACH MASKELL: In 2016 the Pilot of this car won the first ever F4 championship held in the U.S. Today we’re hanging out with 18 year old Cameron Das.

The road to F1 is long, expensive, and contains plenty of obstacles along the way… with no guarantee of ever securing a seat. A typical route starts with karting, moving to F4, followed by F3, then 2 and finally F1 – with each progression adding race intensity.

And fresh off a flight from the U.K., Cameron where are you racing now?

Cameron Das: I’m racing in Euro Formula Open F3 in Europe. It’s been an exciting season and I’m glad to be a part of it.

ZACH MASKELL: Many young racers get their start in karts around age 8. Cameron didn’t start until 15. Two years later he finished top 5 in British F3. 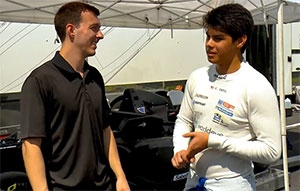 Still in high school, planning to attend a university after graduation…Cameron says professional race drivers need to different from others. On the side, he’s also developing a web series where he predicts future classic cars.

ZACH MASKELL: How would you describe what it’s like to take this thing around turns?

CAMERON DAS: This car’s obviously a lot lighter than a street car. And we’re running on slick tires, so everything happens so much faster. When the car breaks loose, it breaks loose all at once. And very quickly. Reaction times have to be so much higher. Physical ability has to be higher.

ZACH MASKELL: Powered by Honda, 2018 is the inaugural F3 Americas series. These Civic Type R Engines are shelling out 270 horsepower… the car weighing 1400 pounds. No power steering, no ABS, no traction control. The mood was tense. An outsider, hopping into a full-fledged race team’s baby. My extremities - shaking, brain - on overdrive 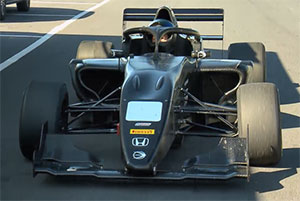 ZACH MASKELL: Alright I’ve got use the clutch here to get me out of first gear… from then on I’m only using the paddle shifters.

This car costs over 120,000 and it’s one of only a few of F3 americas practice cars… if I wreck this thing I’m going into hiding and will I never be seen again.

It is just warp speed instantly. I’m going to get used to this quickly.

I cannot believe this is real life. I feel like I am in a driving simulator.

I noticed very quickly. I’m using my wrists to to steer here, I’m not using my whole arms. Because there is not enough room for that to happen anyway.”

ZACH MASKELL: Unbelievable. By far the craziest thing I’ve ever driven. Probably the craziest thing I ever will drive. It’s raw, it’s wild, and it’s confusing. Because it does everything you want it to do. You are so connected to the ground. No traction control. You feel the air coming across the hills, moving you left and right. NUTS.

ZACH MASKELL: But I’m just starting. So please, don’t ever wake me up.