The high performance electric car wars are officially on. Now some automakers are setting benchmarks for EV range, while others are after lap times and checkered flags. But our Greg Carloss caught up with a company named Genovation, that set its sights on pure speed, and they’re doing it with an American icon.

GREG CARLOSS: The Chevrolet Corvette has gone through just 8 iterations since 1953. And if you think the new gen’s mid-engine layout is the most innovative powertrain ever in a Corvette, think again. 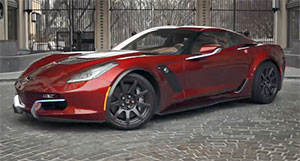 ANDREW SAUL: We started the GXE program because we wanted to reinvent an American Icon...we actually didn’t intend to break world records, but in the course of testing we  ended up breaking a record, we had a standing mile world record and also a top speed world record.

GREG CARLOSS: The GXE starts life as a C7 Grand Sport. Once at Genovation’s headquarters in Maryland, its electro-mutation begins.

STEVEN ROGERS: Under the hood here you see the front battery pack is the most prominent on top. On each side of the battery pack there's mounted an inverter, so we have two inverters because buried underneath we have two electric motors...each inverter is capable of 300 kilowatts of power and therefore we have 600 kilowatts of power in this car which is the equivalent of 800 horsepower. 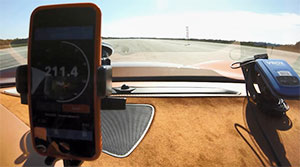 GREG CARLOSS: With 5 battery packs, the GXE offers 200 miles of driving range and with level-two charging takes about six hours to fill up.

GREG CARLOSS: So this is the 8-speed automatic but you also offer a 6-speed manual transmission.

GREG CARLOSS: Taking a Corvette and swapping in a battery-electric powertrain is only half the battle for Genovation. Then comes the meticulous testing and tweaking to make the GXE a record-breaking supercar. 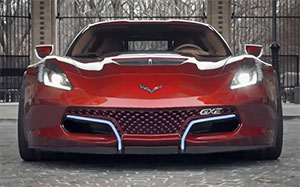 That’s what took us to Merritt Island, Florida and the Johnny Bohmer Proving Grounds inside the Kennedy Space Center, where Genovation conducts its straight line aerodynamic testing.

Behind me is a well surveilled three mile long runway, the perfect setting for the GXE to fully stretch its legs.

JOHNNY BOHMER: It’s the flattest piece of concrete of this size in the planet Earth...The runway has less than a quarter inch of height variation from one end to the other. So basically it’s flatter than your kitchen table.

GREG CARLOSS: And with that extremely flat table set, the GXE was go for launch.

At an official speed of 211.8 MPH, the GXE once again broke its own world record.

After a quick data download, it was my turn behind the wheel. And why waste time? Let’s just get into it.

ANDREW SAUL: Do it! 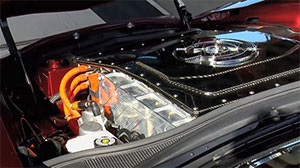 GREG CARLOSS: Oh my god that’s good! I don’t even care if there's no engine noise. That’s effortless 145 miles per hour. I mean I’m not even trying. That is just good stuff right there…

Okay, so it’s a little bit weird for me. Maybe you can coach me with the shift patterns when I’m using my paddles here...is the redline roughly the same as what it would be in that 6.2 V8.

GREG CARLOSS: Okay so let’s give that a try.

ANDREW SAUL: You’ll feel the torque starts to drop off right at around 7.

GREG CARLOSS: It just sounds like a missile coming at you.

ANDREW SAUL: Absolutely I love the sound it makes. People think electric vehicles are always silent, but this one is definitely not.

ANDREW SAUL: We get asked a lot about why that price...It’s really as state of the art as you can find and it’s by far the funnest electric vehicle on the planet I think.

GREG CARLOSS: That title may be up for debate, but for now, the fastest electric vehicle on the planet will have to do.