What car nut wouldn’t want to take a little R&R with a few laps around their favorite race track? But taking that to the next level, say getting together with your buddies for a little head-to-head driving competition is clearly a matter of putting passion before common sense. Well our Zach Maskell has found a way to make that a reality, so to speak, and it’s coming to a flat screen near you.

ZACH MASKELL: Who would’ve thought a racing simulator that started with seven employees would become the most popular console racing franchise? Making its debut in 1997, Gran Turismo aimed for realism and extreme attention to detail for the PlayStation One. 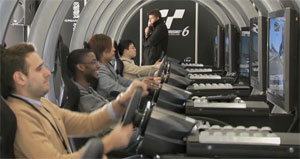 What better place to celebrate the 15th anniversary of a video game that’s sold over 70 million copies. We’re here in the UK at Silverstone Racetrack.

Although making its first appearance in the upcoming GT6 game... the LEGENDARY Silverstone Circuit has hosted a series of GT Academy Race Camps. That’s where average Joe’s compete on-line for a shot at the real thing. In auto racing today… the best talent doesn’t always have the resources to make it to the top. So… in 2008 Nissan decided to let Gran Turismo’s roster of virtual drivers compete for a spot in real race cars, and, get this, two academy winners drove in the 90th 24 hours of Le Mans race.

DARREN COX: People thought we were completely crazy to come up with this idea or it was just a marketing stunt and we weren’t actually going to find any drivers. Over the last 5 years we’ve proved them wrong. We’re finding fast young racecar drivers who’ve gone onto the international scene.

ZACH MASKELL: Cox announced the competition will return for a third televised season in North America. The previous GT Academy-winning NISMO drivers suited up and battled on Silverstone using the simulators… then they hit the track in their 370 Z’s to burn some real rubber. 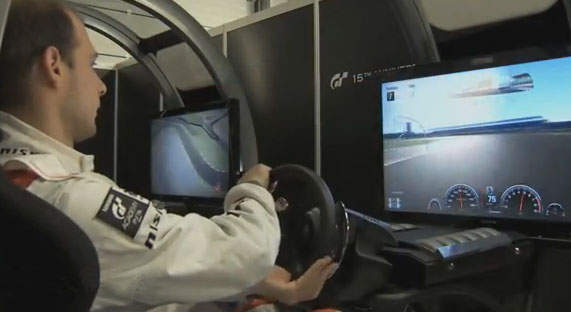 DARREN COX: We continue to expand GT Academy. We’ve now got editions in Russia, America, South Africa, the Middle East, as well as in Europe. We can go further with this. This really has global potential.

ZACH MASKELL: Hundreds rallied at the anniversary. Many of them seemed pleased to hear GT6 would be available on the PS3 and eventually PS4.

KAZUNORI YAMAUCHI: What GT6 gamers and drivers can really look forward to and will be amazed with is the new physics. The tires, suspension, aerodynamics. All the things that affect the movement of the cars have been revamped.

ZACH MASKELL: Now… with over 150 people working on the game, you’ll have the ability to own a 12-hundred car stable with more being added on-line. That’s 200 more than the last version. There’s 33 locations and 71 course layouts to choose from. You can now play on your smart phone, computer or tablet. There’s also a movie being filmed... covering a real-life GT player who now races professionally. 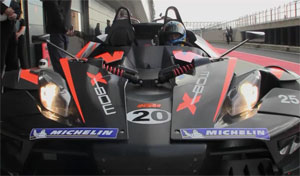 We even had the opportunity to drive in GT’s real indoor simulator…From virtual… to reality. After my drive in the dual-clutch Audi R8… I went for a ride in a KTM crossbow.

It’s a good thing they gave me a full-face helmet. It’s bugging me still… just how much the designers of GT are able to dial in the actual feel of each specific car.

KAZUNORI YAMAUCHI: Recently I’ve come to realize that making GT is fun. It really is. No matter how much hard work you put into it, it’s never a bad thing.

ZACH MASKELL: But that’s not enough for Yamauchi … he left the UK for Germany’s 24 hour Nurburgring race the very next day. His ride? A Nissan GTR GT-3. The entire time… engineers were recording data to test on the GT6 engine. They could even tweak the real car… after looking things over in the game! Designers even keep close relationships with car manufacturers in order to know what went into the build of each specific vehicle.