Home » Features » Over the Edge » Hagerty

Lots of companies offer insurance for collector and classic cars. But only one seems to understand that, to their owners, they are much more than just steel, glass, and rubber. Our Over the Edge guy, Zach Maskell, spent a day learning about this family owned business and its passion for the pure joy of motoring. 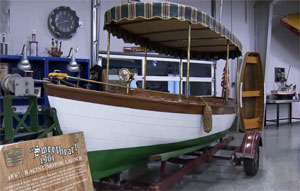 ZACH MASKELL: Hagerty has more collector cars under their wing than any agency in the world. And no other insurance company has as much passion for the objects they protect. So what could be cooler than heading off to Traverse City, Michigan to cruise with McKeel Hagerty, to cruise in some of his own classic wheels. Growing up it was mainly 90s imports that got me really excited about cars. But after hanging out with McKeel for a day, and riving some of these fabulously inspirational cars, they should probably get you revved up as well. Back in the early 80s, Mckeel’s parents sold a general insurance agency, and sailed into the wooden boat business. Well, moving into the 90s, those boat owners also had cars. Fast forward to today, and Hagerty insures cars, boats, and motorcycles.

MH: We can’t judge somebody else’s cars. For whatever reason that they bought it, or own it, restored it or built it from scratch, out of a bunch of parts, they built it their way and they bought it for their reasons. And our job isn’t to judge it. Our only job is to figure out, do they truly like the thing?

ZM: This had us thinking, it’s got to be expensive insuring a collectible car, right?

MH: Even though the cars are more and more and more valuable, the premiums are a fraction of the price typically of a normal car. Because they don’t get used quite as much and people take really good care of them. 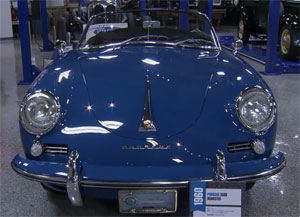 ZM: What car might qualify for such coverage? Luckily for us, Hagerty’s garage has some beautiful examples.

MH: So the collection we have is really a collection of stories, as much as it is a collection of cars. And so many of them tell a story of my life or of some sort of point of the business. You know, cool cars for going on rallies, to cars that were restored by employees. You know the Corvette is our single most insured vehicle in the US. So if there wasn’t a Corvette in here it would be sort of a strange story.

ZM: When asked if there’s a car too valuable to drive, McKeel replied with a firm, Heck no!

MH: There’s nothing worse than to leave a car sitting around. It deteriorates far worse than if it’s just used carefully on a regular basis.

ZM: Ok, just about any car…he thinks maybe the Ford Quadricycle is an exception to the rule. 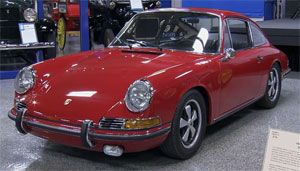 ZM: With your own money?

ZM: He wanted to be James Bond, but no Aston Martins were available. So 500 bucks for what was going to be an ice racing, air cooled Porsche 911 would have to suffice. McKeel learned to fix it up himself, and now spreads that knowledge to enthusiasts of all ages.

MH: What we do to support the hobby as it relates to kids is a couple dimensions. One we started is called the Hagerty Education Program.

ZM: Wouldn’t it be exciting to make your career working with collectors’ vehicles or boats? Well guess what? You could get a job doing it. Schools teach restoration techniques thanks to the millions of dollars in scholarships and grants made possible by Hagerty. But wait! You can’t drive a manual! Well, that’s ok. If you’re 15-25 years old, just see if there’s a Hagerty Driving Experience School near you. They’ll teach you all about the third pedal. And in some of the coolest cars around. So not only is McKeel aiming to get kids excited about the hobby, or a job with classic cars, but he’s essentially growing his customer base in the process. Talk about a win-win.