Home » Features » Over the Edge » House of Dubs

The melding of massive wheels, skinny tires and a low suspension creates the iconic look that defines dub culture, which has dominated the car customization industry for two decades and clearly influenced new car design. So, this week Greg Carloss takes us over the edge for a deep dive into dubs.

GREG CARLOSS: The car customization industry is thriving, evidenced by the dozens of television shows that specialize in it. And while the number of ways to customize a car is essentially limited to one's imagination, there’s usually a common theme. 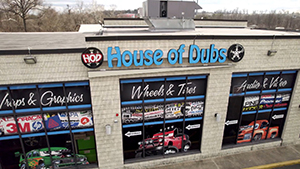 If you’re into cars or have paid any attention to pop culture in the last 20 years, you’ve probably heard the term “Dubs.” But what exactly are Dubs and why are they so popular? Well, we should be able to find some answers here.

House of Dubs is a one-stop custom shop in Laurel, Maryland, founded by Kevin Henson back in 2001, which means he’s been at it since the dawn of dubs.

KEVIN HENSON: So, the Dub culture came about in the late 90’s early 2000’s with a lot of the custom wheels, the larger wheels because before that people would normally stop around 18’s and 19’s. Dubs is like another term for custom wheels, 20-inches and above. So, twenty, meaning double. So, 20-inch wheels became Dubs.

GREG CARLOSS: And big wheels became a big hit. Especially in the Southeast where people started putting them on 1971-’76 Impalas and Caprices, popularizing yet another “d” word: Donk. But we’ll get into that another time.

Naturally, DUB became a brand name for wheels and separately a magazine. There was even a DUB Edition in the Midnight Club video game franchise. 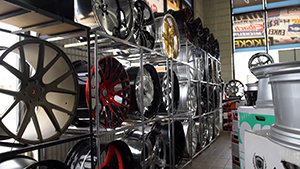 Well, remember, the early dub days were simpler times. Cars and trucks were coming from the factory with much smaller wheels than they are today. Now, even a Toyota Sienna minivan can come equipped with 20’s.

KEVIN HENSON: Yeah, the aftermarket definitely has a major influence on the new cars. Lately you start to notice the manufacturers putting larger wheels on it from the start coming factory with 22’s. So, most people buy, they want to go a step larger so they’ll start out with 24’s and 6’s and even eventually 28’s on those vehicles. It’s past dubs now. Now they’re up to like 34’s.

GREG CARLOSS: Shopping for wheels is like shopping for shoes. Finding the right style and color can tie your whole look together. And with Dubs, bigger is better. Of course, size isn’t all that matters. An elaborate design or custom paint job can really put things over the top. And as with anything style-related, brand name is important.

KEVIN HENSON: I would say the number one player would be Forgiatto. They do a lot of custom stuff that you see a lot of all the time. Then you also have companies like Vossen and then Fuel Off-Road because they do a lot of trucks. That’s getting real big lately. Currently, I have a Ford Raptor. Lifted, big wheels on it. Also have a Mercedes G-Wagon. Tinted out, matte black, dark with off-tires on that as well. 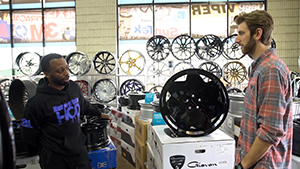 GREG CARLOSS: If you start with a bigger vehicle, then you can put even bigger wheels on it. Which is partly why trucks are trending.

Suspensions are being lifted instead of lowered and bodies wrapped rather than painted. A stark contrast from the slammed and murdered out Escalades of yore. But then again, dub culture was never about doing things traditionally.

KEVIN HENSON: I would say it evolved more into function versus before it was just loud like “look at me” everything was like over the top before. Now it’s everything wants to be functional.

GREG CARLOSS: Which got me thinking. What ever happened to spinner rims?

KEVIN HENSON: Yeah spinners were big for a little while. They died because it started to be oversaturated. You could go to Walmart, PepBoys and pick up spinner hubcaps. You could have a hooptie; a Toyota Corolla broke down with spinners on it. So, a lot of people that were originally spending the money on them, they didn’t want to spend it no more because they start to see them everywhere.

GREG CARLOSS: So, if you don’t know, now you know. If your new car or crossover has 20-inch wheels, technically, you’re sittin’ on Dubs.