Home » Features » Over the Edge » Hovercraft

Our Steven Chupnick has tried his hand at a lot of unconventional vehicles - snowmobiles, a Zamboni, a hot rod lawnmower, the Nutmobile, and even took a flyer in an airplane. But nothing prepared him for his latest adventure as he went Over the Edge on land and water.

STEVEN CHUPNICK: What an invitation! From the US Navy no less - a chance to test a combat ready hovercraft! We said yes faster than a cat five hurricane and bee-lined it to Virginia Beach’s Joint Expeditionary Base, and Assault Craft Unit 4.

We've probably all seen a hovercraft in the movies, on tv, in pictures, possibly in real life...but most of us haven’t seen anything quite like this - meet the LCAC.

LCAC – it stands for landing craft air cushion...81 feet long, 47 feet wide and 30 feet tall...Oh, and did I mention, its four engines throw out 16,000 horsepower. In other words...it’s big in every respect...the fully amphibious craft is designed to transport cargo, troops, tanks, you name it...from sea to land and land to sea...

JOHN SHELTON: The LCAC is capable of transporting those pieces of gear quickly and efficiently to a very high percentage of the world’s beaches.

STEVEN CHUPNICK: Within seconds, the LCAC’s rubber skirting fills with air, rises up and it’s off... But to really get to know an LCAC, you need to check it out from the inside out...

KEITH SCHARNHORST: This is a TF-40 Bravo, main engine. Our craft has 4 TF Bravo’s; they produce the power to the propellers and to the lift fan. The lift fans are what produces the air underneath the craft to actually lift it up. 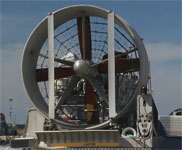 STEVEN CHUPNICK: Two bow thrusters on top give the LCAC 20 percent motion and a gale force 80 percent comes from two 12-foot tall props in the rear...nearly all maintenance on the LCAC is performed on site from tweaking the prop blades to machining parts...but I know...you want to see what this 27 million dollar craft can really do...so with the help of the 5-person crew, I took the helm...

JOHN SHELTON: I told you Steve, you can honk the horn.

STEVEN CHUPNICK: There you go.

JOHN SHELTON:  Are you happy?

STEVEN CHUPNICK: Ok, so I wasn’t able to really fly the LCAC...and there’s a very good reason...these men and women go through years of extensive training to learn every inch of the boat...

STEVE SCHWEIZER: We can put our students that would be too high risk for the LCAC. 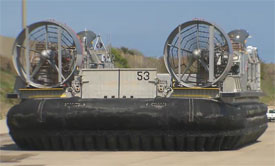 STEVE SCHWEIZER: We can implement any different type of casualties or put them in specific navigation problems or situations.

STEVEN CHUPNICK: And that training definitely showed during the practice mission we were a part of...three LCAC’s reached the beach in perfect formation at 40 knots or 46 miles per hour...yeah, this bad boy is one of the Navy’s best kept secrets...and light years away from the last landing craft made famous during World War II. But, there’s more...the Navy has commissioned a new LCAC design. No official word on when production will begin. But, based on our experience, it will make ‘hitting the beach’ for the 21st century soldier both safer and surer.