Iceland has some of the most breathtaking landscapes on earth. But, that terrain, not to mention the weather, is not for the faint of heart. That’s why it’s an ideal spot for automakers to benchmark their off-road prowess. Automakers like, say, Land Rover…, well, you can probably see where this is going…that’s why we when we got the invite, it went straight to our Over the Edge guy, Zach Maskell.

ZACH MASKELL: This may be the closest I’ll ever come to walking on another planet. Jagged features, unpredictable weather and the ever-present magma just below your feet. 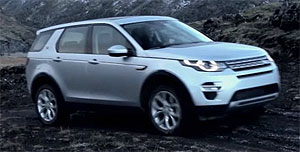 "A volcano has been erupting here for 5 months now. This is a place filled with absolutely gorgeous scenery, and one of the places that you get to see the Northern Lights. We’re out here with Land Rover’s Discovery Sport and it’s time to do a little bit of discovering of our own."

Fire, ice, majestic cliffs and waterfalls – it’s no wonder this has been a top pick for sci-fi movie directors. Even astronauts trained here for their lunar landings. So a perfect setting for the Discovery Sport to show what it’s made of.

"Don’t let what people tell you, fool you… Greenland is ice and Iceland is green. There is still ice and plenty of snow here." 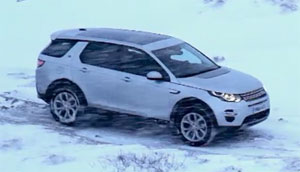 For those after luxury… and the ability to go anywhere – Land Rover is usually a top choice. Since 1948, Rovers have been the favorite for military forces and adventurers just about everywhere. But with so many new creature comforts, have they still got what it takes? Journalists from around the world were invited here to challenge the newest member of the Land Rover family. Whether it’s tarmac, gravel, sand, or snow… the Discovery Sport’s improved Terrain Response Control ensures the drive is steady and safe. This was especially important as we made our way further from the capital city of Reykjavik.

"As we drive around the countryside, human interaction drops, just as well as the sun. In the winter time they only get 4 hours of light here… conversely in the summer time there’s about 20 hours of light.”

Day or night, the Discovery Sport’s stiff chassis was never shaken by deeply rutted out trails, and we certainly tried. Pure, clear melting glaciers allow for massive hydro operations that create Iceland’s electricity. This also means more challenges for us… as we make our way through the wet obstacles the island nation has to offer.

“I don’t care what kind of vehicle you’re in, a stream crossing with a fairly quick current is always something a little intimidating to look at but luckily for us, we are in the fully capable Discovery Sport and we’re going to make it over here no problem.”

The Land Rover team reminded us that the Discovery Sport has a wading depth of about two feet… and it will go deeper, but we resisted the temptation to find out for ourselves.

“We started off in the city, now we are back here in the mountains, driving through streams. We’re on ice… luckily for us we have studded tires and we have not even come close to getting stuck yet.”

Seeing as the Land Rover team routinely off-roads in the most remote locations in the world… any piece of advice is welcome.

DAVID SNEATH: “Some of the places that we’ve operated in other than Iceland… Oman, Morocco, Argentina, you name it, we’ve probably been there… it’s a Land Rover after all.” 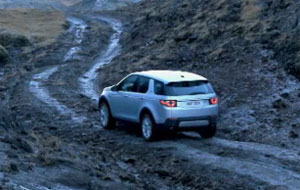 ZACH MASKELL: If you didn’t pay much attention, you’d have no idea we WERE following roads throughout our journey. Let’s call them what they are… trails! Actually with Iceland’s hostile climate, driving off the trail is illegal. Tire marks can last for decades. Staying on path… we cruise out of a spot marked “unpassable.” We went drove through thick falling snow, while battling fog.

But we and the Discovery Sport made it out unscathed.

“So that’s what I call a success. I managed to not wreck any of Land Rovers Discoveries, made some new friends, saw some beautiful sceneries… I mean that’s what it’s like… off-roading in Iceland.”