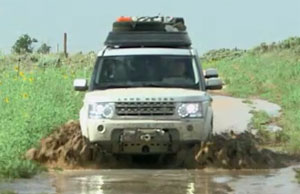 Decoupling from the everyday world is what a true adventure is all about.  And our over the edge reporter Zach Maskell did just that. He joined Land Rover on their “Expedition America” where he had no choice but to focus on the prize. Reaching the end of a coast-to-coast 4-thousand mile journey… almost entirely off-road. And along with a lot of beef jerky and trail mix, it was as true an adventure as they get.

ZACH MASKELL: In my time spent on Earth I want to see as much as I can. Being a part of a trip from North Carolina to Oregon… off the tarmac… that’s a done deal. It’s called the Trans-American trail. Until Land Rover decided to conquer the feat… only motorcycles dared the risky undertaking.

SAM CORRERO: If you’re not a couch potato and you want to get off your butt, and ride, then this is the thing to do.

ZACH MASKELL: That’s Sam Correro. In the early 80’s he had a dual-sport motorcycle he didn’t want to ride on the highways in Mississippi. So he started making his own trails… and from there he wound up crossing the country… scribbling down every turn.

SAM CORRERO: I didn’t wake up one morning and say ‘hey I’m going to do this.’ This evolved over several months, several years. 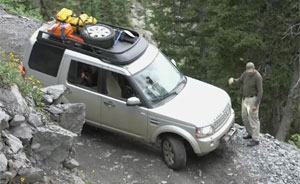 ZACH MASKELL: Armed with Sam’s rolling maps, a turn trip and GPS… veteran adventurer Tom “TC” Collins is calm, collected and patient. He not only had to figure out which pebble we turn at… but he had to deal with me asking a million questions. He would definitely be my first pick for a partner to go trail blazing.

From Ashville, North Carolina, it was onto Tennessee, then further south.

TOM COLLINS: The real off road really begins in Mississippi. From that point all the way to the coast, it is almost all dirt roads with very little pavement thrown in.

ZACH MASKELL: Clarksdale Mississippi, the original home of blues. The Land Rover guys chatted with Morgan Freeman, who owns Ground Zero Blues club. That’s just one of the landmarks on the way to the Pacific Ocean.

Tom Collins said this was going to be one crazy ride. Yup. I’d say he just about nailed it. Razor sharp rocks, the possibility of flooding and thousands of unmarked roads to turn on to. One thing’s for sure, I was happy to witness history. 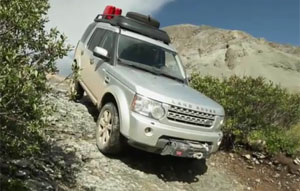 Should Mother Nature act up, we could be stranded for days. Well, as you might expect… we were locked and loaded, ready for battle.

TOM COLLINS: Land Rover provided 2013 LR 4’s. They are equipped with the heavy duty package. The locking rear differential, Full sized spare. And then for aftermarket accessories, from Land Rover we have a full roof rack and a winch.

ZACH MASKELL: The further we went West… the harder the rocks chewed on the standard all-terrain tires.

This LR4 with the lux package just so happens to have a cooler right in the center console, leather seats, and thanks to the jokesters with Land Rover I found out even the back seats are heated. Now that didn’t really come in handy too much this time of the year but I’ll tell you what, the air ride suspension; that definitely did.

200 miles a day… bump after bump… cruising between 1 and 50 miles per hour is pretty draining. But when you’re in a car full of men, asking questions like “do aliens exist?” and “who’s your favorite supermodel?”… hilarity ensues. Before you know it we’ve reached our next stop. 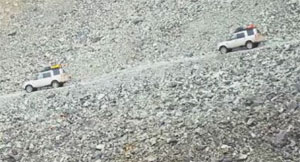 TOM COLLINS: We’re at the approach to Black Bear pass, the top of the pass is right behind us, approximately 12,800 feet. It’s a pass that is terrifying to a lot of people. Huge drop offs, K-turns on switchbacks on 1,000 foot drop offs.

ZACH MASKELL: T.C. had no problem getting through the Rocky Mountains in Colorado. He’s taken 4 wheels places only few have. Using caution is the only way to cross the USA when taking the hard way, but inevitably one of our LR4’s took a bullet thanks the sharp rocks in Nevada. A quick break... and we were back at it.

TOM COLLINS: So this one coming up, that’s going to be a sharp right. And then in point 1-8, turn left.

ZACH MASKELL: From Richfield, Utah to Battle Mountain, Nevada. It got hotter, and if you were the trail car… the dust could cause zero visibility. 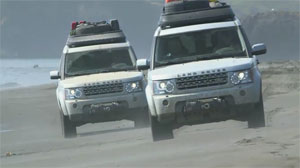 Victory is almost in sight. But smoke blocks the view. That’s because fire has engulfed the forest.

But TC’s parade continues… and after 27 days… the LR4’s rip down the beach at Port Orford, Oregon.

Land Rover; with the first trucks to complete the Trans-American trail! And for me, it completed an adventure that just may be impossible to beat.