Home » Features » Over the Edge » Make an MPACT 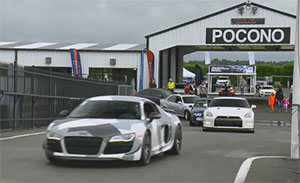 For our Zach Maskell, our Over the Edge guy, walking around and admiring the well cared for gems at car shows is totally routine. But Zach can’t go long before he needs more than just stationary satisfaction. So, combining a judged car show, with triple digit speeds? Now you’re talking his language!

ZACH MASKELL: The event where you can do more than just park your car. MPACT is where you can literally do it all. Held at Pocono Raceway in Long Pond, Pennsylvania… it’s one for the books. While it’s mainly a German gathering – more specifically the M division of BMW, other brands are welcome.

Vinny Giglio: I came from Charlotte, North Carolina. Drove the car up, took me about 9 hours yesterday… amazing day.

ZACH MASKELL: Vinny was supposed to meet a buddy… until he ran into car trouble. No worries though, with an Audi R8 V10 supercharged – you’re bound to meet new ones. 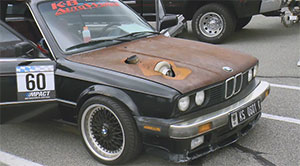 Vinny Giglio:  Got a new friend riding along. Dad just said “hey, can he go for a ride with you… I said sure let’s go.”

ZACH MASKELL: High performance driver’s education… 2300 foot side by side racing… a drift taxi… burnout contest… a judged car show… and plenty of vendors. Perhaps the best part – seeing cars which once had not even 200 horsepower, beat cars 10 times their retail price.

ZACH MASKELL: This is the perfect atmosphere for this group to test and tune the 800 plus horsepower BMW. 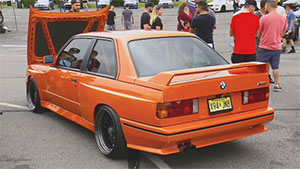 Kosove Berisha: It’s fun. No animosity. A lot of fun, racing people,  no one judges anybody, it’s fun.

ZACH MASKELL: That same chassis… is also the bones – of a legend.  In the mid 1980 BMW decided it needed a serious competitor for both the road and the track…they took the e30 chassis and made the first of the M3 line.

A stiff chassis and direct steering made for a fierce track car. To this day, it has over 1500 victories and is unbeaten as a touring car. While it came with a 2.3 liter 4 cylinder… many later opted for the next M motor… out of the e36. In line after that is the e46 body. That’s followed by the only M3 to have a v8… the E92. And most recently, the F80 M3… which is labeled as M4. But we won’t get into that.

ZACH MASKELL: “So somehow I convinced Jaycent to let me drive his car. Much appreciated my friend.. This thing has 500 horsepower on 93 octane and 600 and… 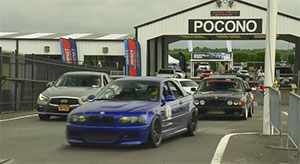 ZACH MASKELL: This car is the last of the raw feeling m3’s before electronics began taking over…Jaycent’s double up on the fast. Maximum PSI turbo kit with a Precision 6266 turbo means power delivery like a kick to the face. Here we go.

Taking it easy in first. Get us into second.. ohh buddy when that turbo kicks in. 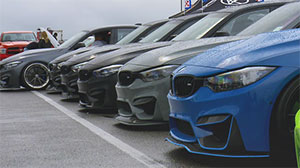 "Oh my goodness at the top end this thing is an absolute beast."

ZACH MASKELL: Whether you want to hard park… or get out there and make some noise. Combine this all together and you have a car show that makes an MPACT… like no other.