Home » Features » Over the Edge » Race Down Memory Lane

Our new performance testing venue, Mason-Dixon Dragway in Boonsboro has been a speed demon hotspot for the Maryland and the entire Mid-Atlantic for longer than we’ve been on the air. And, this week our Over the Edge guy, Greg Carloss makes his way out there, not for numbers, but for nostalgia.

Greg Carloss: Who doesn’t love a walk down memory lane? Well today at Mason-Dixon Dragway, memory lane is a prepped dragstrip and not everyone’s walking. 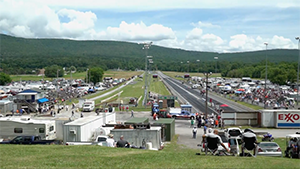 Greg Carloss: Pretty well attended may be an understatement. The place is packed with people who came for cars...speed...and memories.

Greg Carloss: Mason-Dixon dragway officially opened in 1961, so the track itself is a piece of drag racing history. And as the morning cloud cover moves east over the mountains, racers roll in while the sun shines on the car show. The show is open to all makes all models and all eras, but as you might expect, vintage cars still dominate the field.

Judge #1: I mean you’ll see things that, you know, you would never thought you would have seen. Something maybe out of the movies or something you grew up to

Judge #2: And it takes you back to the past. And a lot of the guys, they actually feel younger. I think when you see them, they’re smiling at you when they’re looking at their cars. 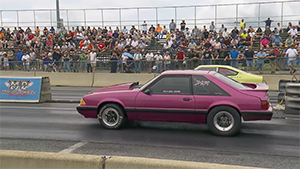 Greg Carloss: Meanwhile, there’s plenty of smiles just off the track with a group of lead-footed legends.

Elmer Wachter: Well they’re calling it a funny car reunion so the car is from the 1970’s that were funny car drivers and crew members, they’re up in the age from anywhere from 84 years up into their early 90’s and to get together to get 50 of them together at one time will be a pretty difficult task in the future...so this is a great opportunity for those people to see each other one last time.

Greg Carloss: And Maryland-native, Tom Sneden is a driver many of the fans came to see.

Tom Sneden: I started racing in 1952...I’ve raced quite a few. Anything from super stockers to funny cars. Fuel funny cars. I was well known through the country.

Elmer Wachter: I think it’s everybody’s personal favorite because they always get to see somebody they haven’t seen for ten or fifteen years. And, they do a lot of what they call “bench racing” where they talk about everything; when John got beat by Phil or, you know, just everything that ever happened to them in the line of drag racing. 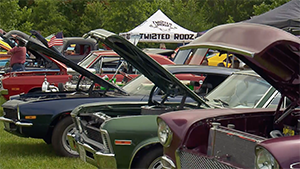 Greg Carloss: While some may be here for the bench racing, Tom brought his Dodge Coronet Superstock for the real racing. And with 274 cars registered, there’s plenty of it.

Elmer Wachter: I believe that drag racing began when the second car was made and that’s a Bill Wilcom statement. The human nature is to be competitive.

Greg Carloss: Even as the sun starts to set on the cars and the drivers from drag racing’s haydays, Elmer is keeping the pedal down toward the future.

Elmer Wachter: We have a junior dragster race which is kids from 6 years old to 18 years old before they get their license...We will find something that the people want to be entertained by and we’ve changed up with our street racing. We’ve added some index classes because people want to see heads-up racing. Side-by-side racing...so we’re doing well.

Greg Carloss: And that means the good times will keep on rolling at Mason-Dixon Dragway.