It was 1970’s something when mud-bogging and tractor pulling trucks first began taking steroids. Tire sizes grew, and so did the bravery of the drivers. In 1981, the first car was crushed, and the first monster truck was born. Bigger and badder than ever, it’s time to get high with Zach Maskell as he goes over the edge… for a driving experience like no other. 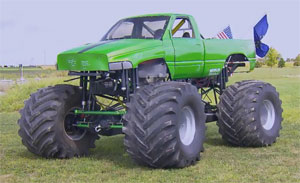 ZACH MASKELL: “I’ve always wanted to drive one of these beasts…so here we are in Franklin, Indiana, at the only monster truck driving school in the country.”

ZACH MASKELL: But here there’s no class time… no boring paperwork. Just 15 acres with a designated track. The owners had over 60 drivers in one year… from across the world… test their skill.

ZACH MASKELL: “So you’ve been surrounded by monster trucks for quite some time now… you were building the jumps in the arenas… what made you actually want to buy one?

DON ROYALTY: “I thought it’d be interesting to drive and just have one. And then after buying it I realized at 62 years old… it’s probably a little too rough for me. So I started the school to find a driver.” 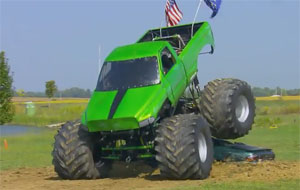 ZACH MASKELL: But that’s a feat easier said… than done.

ZACH MASKELL: And trust me when I say… Don’s a good ol’ boy.

DON ROYALTY: “To me it’s all about making their dream come true. It used to not be that but now, people come up and they give you a hug… “that was really a ride”… ‘alright’… so that’s all it’s about to me now it just having fun.”

ZACH MASKELL: A lot of the parts… you can get from Tractor Supply. It’s built on a tube chassis, sitting on 66 inch tires, with a fiberglass body.

DON ROYALTY: We’ve got a 502 big block Chevy… it’s got an 871 blower on it. It’s running on pure methanol. We’ve got 4-link suspension… nitrogen filled shocks…” 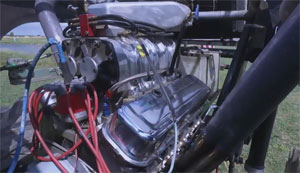 ZACH MASKELL: “What does it cost for somebody to come out and do this? “

ZACH MASKELL: Competitive trucks can cost well over $100,000 to run each year. (smash transition) Letting out your anger on the car you’re about to level… is free. (pause) Inside the destroyer, the controls are the same as what you’re used to… but YOU’RE steering the front… and rear wheels. Uhhhhhhhh.

DON ROYALTY: “I’ll kill it with the kill radio if I see something happen… if you were to get upside down or get out of control, you kill that.” 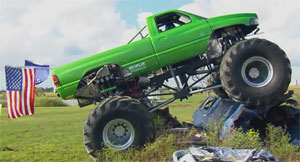 ZACH MASKELL: “And that’s similar to what they do at Monster Jam right?

DON ROYALTY: “Everybody. Exactly. Same motor, same everything as they got there.”

ZACH MASKELL: Starting out… I roll over my first jump… focusing on the fact that I’m about to launch over a full-size car. The key is to stay on the gas… otherwise you’ll land front wheels first and uh… it’s going to hurt. Well, of course, I let off the gas half-way through… and this was my first landing. Ouch. 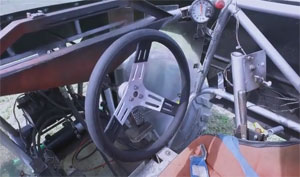 As far as that rear steering goes… it took me a few laps, and crab walking over jumps… to time it right. But it really started to click as my ride was nearing an end.

ZACH MASKELL: “My heart is throbbing, I’m shaking, this thing’s violent man… there’s so much to keep in mind. But it is a blast.”

ZACH MASKELL: Don and Regina… thanks for letting me take your rig for a spin… and sorry about the cones. Well, I’m gonna go take an ice bath.