It’s been over 100 years since Henry Ford put America’s middle class on wheels with the affordable and durable Model T. Almost six decades later,  Ford created another ride that would again change our concept of what an everyman’s car can be. That car is the Mustang. The original “pony car” has reached a milestone of its own, and our Over the Edge reporter, Zach Maskell, just couldn’t wait to celebrate.

ZACH MASKELL: Fifty years ago, baby boomers were making money and optimism was contagious. At the same time, Ford wanted a new dog to put in to the sports car fight.

GALE HALDERMAN: Well, I knew Iacocca liked it because when he looked at it, he was twirling his cigar. When he twirled his cigar, we knew he liked what he saw.

ZACH MASKELL: In April of ’64, Iacocca’s production “pony car” hit show room floors. Though its VIN will show 1965, fans dubbed it “the 1964-and-a-half Mustang.” Over 400,000 were sold in its first year. An attractive low price of just over two grand reeled in buyers.

TRACEY BROWN: I just remember they were really cool. I mean, girls love horses or anything with a horse or a pony on it.

ZACH MASKELL: The name comes from a World War II fighter and, of course, the wild and free-roaming horses of the West. After a successful year, Ford took apart a convertible and put it back together on top of the Empire State Building. Talk about good publicity. Five decades later, they did the same. The Mustang Club of America went beyond that, holding two epic birthday parties at Charlotte Motor Speedway in North Carolina and Las Vegas Motor Speedway. Charlotte gave me a big bite of American pie.

TRACEY BROWN: We’re actually living a part of history. Something that, you know, you can tell your kids and your grandkids about.

ZACH MASKELL: The Mustang was originally unveiled at the World’s Fair in New York long before I was born. Fifty years later, I got to sit in one of those cars. 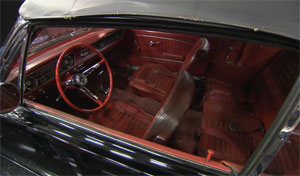 ZACH MASKELL: A 1964-and-a-half…this car is simply a unicorn. 77,000 original miles on it and it uses a generator, not an alternator. This thing is crazy to see in person.

ZACH MASKELL: I got chills when the owner’s son let me look through a log book his father kept from day one, mice bites and all.

LEE MANSELL: This is one of 12 cars that was at the World’s Fair. It’s the only one we know that’s intact. It still has the plates and brackets underneath, where it was attached to the Magic Skyway.

ZACH MASKELL: Diehards from Australia, Germany, France and Italy made the trip. Some cars were even shipped overseas. You could, perhaps, say it’s like one big family.

DR. MANNY COMEAUX: And they’ll loan you their tools. They’ll jack the car up. They’ll get under it and help you fix it. And, so it’s a nice environment. Good people. 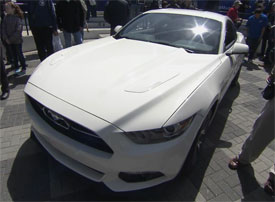 ZACH MASKELL: Thousands of them on the infield. Thousands outside. First generations. The less sought after, more fuel-efficient Mustang II. The third gen, which included the Fox Body. The fourth gen, which your neighbor has probably owned.  And the fifth gens, which teleported back in time to the late 1960’s styling. And the all-new 2015 comes with independent rear suspension and your choice of a boosted four-cylinder, a V-6 or V-8. Even a special Fiftieth Anniversary Edition, which only one thousand, nine hundred and sixty-four will be sold. You see what they did there?

ZACH MASKELL: Some are daily driven and some have retired from everyday abuse. But everyone had a memory or 20 to share.

TERRY CAMPBELL: I courted in it. Got married in it. Brought all my kids home from the hospital in it. And so it’s a pretty special car.

ZACH MASKELL: Terry isn’t sure why he chose a ’65 Mustang for his first car, but one thing he does know is it will never leave the family.

Not matter what it was, everyone had a favorite part of the weekend.

AMY FOX: There’s people going around the track and I’m going to get to ride in one…a GT 500…so that will be exciting. 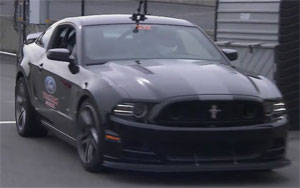 ZACH MASKELL: A rush? No doubt. I’ve seen NASCAR run this track and always wondered what it would be like. Holy potato!

ZACH MASKELL: The G-forces that you experience is something that’s completely unforgettable.

ZACH MASKELL: It’s not hard to see why the Boss 302 is the best out-of-the-box bang-for-you-buck after that ride. The Mustang doesn’t just symbolize dedication to a brand…it represents America. It stands for our freedom. So thank you, Ford, for letting our original “pony car” live on.