Home » Features » Over the Edge » No Fly Zone

If you’re fortunate enough to own an exotic car - a real dream machine - then you get a big congrats from us. But now what? Street driving a mega-buck-mobile can get boring fast. Wouldn’t you love to have an easy, safe way to let it all hang out? And let your buddies watch you do it? Well, prepare for take-off as our over the edge guy, Zach Maskell, races towards the horizon. 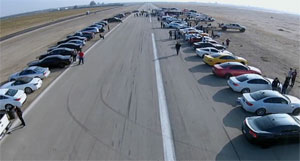 ZACH MASKELL: The all-wheel drive acceleration of the W16, quad turbo Bugatti Veyron will change the way you look at life. It’s not the loudest… or even the fastest car here… but this was a perfect start… to an unordinary day.

No Fly Zone is one event put on by Omega Motorsport. Half mile roll races, happening about every 30 seconds, for the entire day. Over 100 cars, pairing themselves up with whoever will race. This is a little different from your local track on a Friday night.

We’re in one that has 1200 horsepower and we’re about to see how fast we can go in half a mile, just outside Bakersfield, California. High dollar… high horsepower cars… racing for fun on a closed runway. It’s a no pressure atmosphere, and anyone is welcome. Even heavy hitters like the Veyron come just to play. 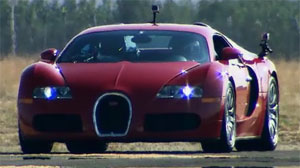 So the GPS says we just hit 181 miles an hour and let me tell you what it felt nothing like that. It felt like maybe 100. This thing is just incredible. The owner of the Bugatti also brought out his Porsche Carrera GT. I was happy to see that neither car was simply there for show.

TRAVIS ELLIS: That’s something that when I started getting into cars a while back that I said I’d never do. When I bought something I was going to drive it like it was supposed to be driven and that’s the same attitude of everybody else out here.

TONY LOPEZ: I love the atmosphere. We surround ourselves with a great group of people. Everybody’s always appreciative that the event is so low key. It’s not a lot of egos and people trying to bash each other left and right.

ZACH MASKELL: Some are out to improve their own time, some… out to beat others and for the rest… it’s simply for the good vibes.

LYNN BROWN: The sound of all the engines and just the flat out being able to get in the car, drive fast is incredible.

ZACH MASKELL: Oh and the match ups… were good. 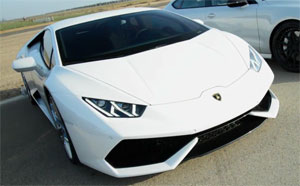 Lamborghini’s newest creation, the Huracan, just got finished being broken in today, was bought one week ago. Now we’re going to see what she’s got. The stock Lambo beat a modded Corvette ZR1. It was a nice win to be a part of.

ZACH MASKELL: The driver wasn’t even the owner of this car.

RICHARD FOWLER: The Huracan, you know I’m letting my friends drive it, brothers drive it, family drive it. It’s kind of like the community car today. Everyone’s having a good time with it. Obviously the orange one only I drive.

ZACH MASKELL: And that’s because this stage 3, twin turbo, Underground Gallardo has 1250 wheel horsepower. His top speed for the day?197 MPH. To give you an idea… here he is walking the Huracan. He wasn’t the only one turning the boost up…

Alright time for a little Japanese love. 800 Wheel horsepower Toyota Supra… running against a McLaren 12C. And we are pulling him in third gear like crazy…The feeling of a huge turbo will never lose its flavor. 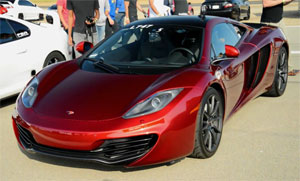 Piloting a 12C of his own… is a man who’s been racing 52 years. He once had the fastest ZL1 Corvette in the world. He enjoys driving his Lamborghini, but the looks he gets from the McLaren are different.

LANE GOLDSTEIN: With this car, people come over, they want to know what it is. And you tell them it’s a McLaren. And they go ‘who makes it?’ And after you tell them McLaren makes it, they go well what kind of motor is in it? It’s hard to explain to people that McLaren is their own company, they make their own car.

ZACH MASKELL: Well here’s a couple that you do know. Somehow we convinced them to run… from a dig. Please… don’t ever wake me up.