If you had to choose to do something every day for the rest of your life… might this be it? 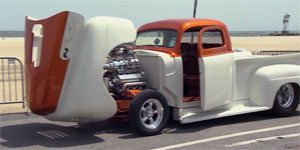 “I’m a big fan of peace and relaxation. However, as you might guess I’m also a fan of in your face action. What if I told you we found a place that combines all those things together. It’s no utopia... It’s Ocean City, Maryland. My only gripe with it is that this only lasts one week!”

This is the 25th anniversary of Cruisin’ Ocean City, or “Cruisin’ Week.” Being one of the biggest shows on the East Coast, over 3,500 cars are on display, with thousands more just showing up.

Hot rods… customs… street machines… anything 1974 and older is eligible for a trophy.

TOMMY SIMS: “We’ll be here for as long as they have it. And if they move it from here, we’ll go wherever they go.” 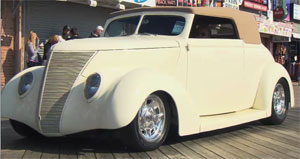 ZM: This couple hasn’t missed a year since the beginning.

WOMAN: “I like the ocean myself. I come for the ocean.”

RYAN HERBERT: “It started in 1991 with my father-in-law, Jack Hannon and he had a radio show that he was doing and he wanted to bring the car show he was doing for the radio show to ocean city.”

ZM: Little did he know this would become one of the summer highlights for so many.

COLIN ROCK: “I actually just talked to somebody who drove all the way from Colorado. Which is awesome that people are coming from all over the US to see this event which is still one of my favorite ones of the year.” 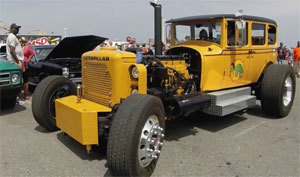 ZM: You’ve got the main show at the inlet… other satellite shows… all sorts of vehicles cruising the strip… and action inside the convention center. I gave my best shot at auctioneering gibberish… then checked out the sweet memorabilia and cars up for grabs.

That’s where we found a young cruiser, looking for some inspiration.

YOUNG CRUISER: “In only a few years I’ll have my very own Camaro.”

ZM: And we bumped into someone else hanging out… Christie Brimberry of Fast N’ Loud was strolling around the show, posing with cars and signing autographs.

CHRISTY BRIMBERRY: “This is our first trip to the east coast. It’s been fantastic. We definitely will be back out here again.”

ZM: Well, it was time to relax, and just sit and admire the show cars moving just a few inches above the sand. If this was the case everyday… I may be looking for some beachfront property. 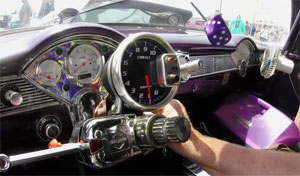 TOMMY SIMS: “Look at the cars. The crowd speaks for itself. All you have to do is stand back and look at the workmanship into these vehicles.”

ZM: Some were already in overdrive, planning ahead for the next show.

NICOLE FROD: “I’m looking forward to next year when I can drive my own car and everyone can see that a girl… can drive too.”

ZM: Ah the beauty of car shows. Can you say contagious? And the coolest part about Ocean City, is that so many people come and go – you’ll rarely see the same stuff! 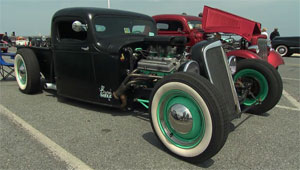 WOMAN: “Every day we see something we didn’t see the day before.”

ZM: Vendors… auctions… celebrities… bands… and so much more. If you claim to be an auto enthusiast and are remotely close to this beach town… I don’t know how on earth you’ve been missing it. Luckily… it’s back again next year.

“So it doesn’t matter if you have a completely restored car, completely original, or fully built, bring it to cruising week and you’ll get along with anybody else with a hot rod.”