For many race fans here in America, NASCAR reigns supreme with its high-speed, nearly constant pedal to the metal oval track action. Well, our Greg Carloss wanted to get in on that action and he found his chance to try out at Virginia’s Dominion Raceway.

Greg Carloss: Since joining MotorWeek, I’ve driven race tracks all over the world...mostly road courses with no competition. So, I thought it was time to get out of my comfort zone and into an actual race on an oval track. So, down I went, just south of Fredericksburg, Virginia, to one of our favorite venues, Dominion Raceway. 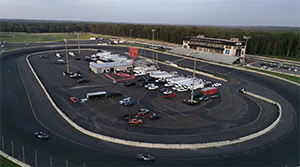 Chris Stefi: Well, we’ve got a little bit of everything...we’ve got a ton of different divisions, ton of cars here running in the NASCAR Advance Auto Parts Weekly Series, as part of the NASCAR hometown tracks. It’s like the minor league baseball series...And it's your home ground. They run every Saturday night, typically. That’s where your local stars come from.

Sergio Pena: My name is Sergio Peña, and I’m driving the number 01 late model stock car today in the late model class...racing is my life. So for me, it’s definitely a career. It’s something that I want to try to be a professional race car driver in whatever series it might be.

Greg Carloss: Now I’ve got some driving chops, but not enough to hang with the likes of Sergio, which is why I’m competing in a lower class known as Any Car.

The Any Car series, as you might guess, is open to just about any car.  As long as it’s not too heavily modified and it has the proper safety gear. And of course, you just gotta sticker it up. This is Pete Sullivan. A decorated driver in the Any Car series, he was brave enough to lend me one of his race cars.

Pete, this is my first time out racing and you’re going to provide the car. Can you tell me a little bit about it?

Pete Sullivan: It’s a ‘98 Camaro Z28. We had to do a motor swap for it. We towed it in, it had a blown motor in it. They dropped it off to us, never picked it up. So we decided to turn it into a race car. 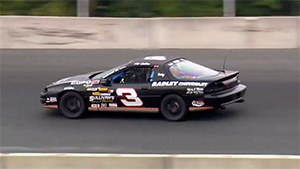 Greg Carloss: And with that, it was time to strap in for a little practice.

This car definitely is as advertised. It is fast, it’s responsive. Woo, this thing fires off corners. It’s all about the setup, nice and easy and patient through here. Stay down on the line, get on it. Oh, that was pretty.

With Pete’s car so dialed in my confidence grew with each lap...that is until the final moments of qualifying... After the smoke cleared, a blown power steering pump proved to be the culprit, meaning that despite qualifying second, I’d be driving the entire 20 lap race with no power steering.

Alright, here we go. Definitely sketchy without my power steering. Uh oh, somebody getting loose in front of me. Alright, rubbing is racing as they say and we have our first caution.

Not the start I was looking for as I quickly fell back in the field. But as the race went on I had my moments. 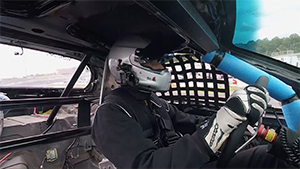 Passing on the outside, that’s a pretty good overtake I think.

Followed by more of these moments..

Man, I am just straight getting passed now.

The lack of power steering proved to be a bigger issue than I expected and if it weren’t for a late red flag offering some reprieve, my Gumby arms may have given out.

And checkered flag, we made it! We made it through the race. I do not have power steering. My arms are dog tired, there were a couple of wrecks. I did not finish first, but I finished and I’m happy about that. What a great time.

As it turns out, I’m not on the fast track through the NASCAR ranks, but hey, at least I still have my day job.