If you watched MotorWeek recently, you know Land Rover's legacy of building "go anywhere, do anything" vehicles continues today with the reimagined Defender. But, it was the Series 1 that first validated that phrase. And our Greg Carloss has found the long lost example that once walked the walk, or should we say drove the drive. 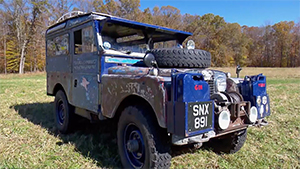 This is a 1955 Series I Land Rover better known as Oxford. And to say it’s come a long way to our off-road playground outside of Annapolis, MD would be an understatement.

DAVID SHORT: My name is David Short and I’m the president of the Rover Owners Association of Virginia...This is the Oxford in America, the Sea to Shining Sea overland trek. We’re bringing the Oxford Land Rover across America.

GREG CARLOSS: But David’s trans-American trek is just a snippet of Oxford’s story.

DAVID SHORT: In 1955 six college students in England from Oxford and Cambridge university had the idea of taking an overland trek...This here is the Oxford rover and it’s partner was the Cambridge rover and the six students got in the two Land Rovers and they drove from London to Singapore which was titled The First Overland 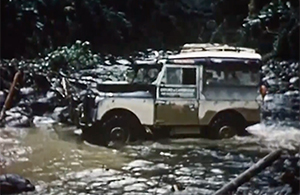 HISTORICAL VIDEO NARRATOR: By road from London to Singapore. More than 18,000 miles by Land Rover. The Oxford and Cambridge far eastern expedition set up a new record. And not only a record of enormous distances, but of a journey through every kind of terrain that Europe, the Middle East and Asia could offer.

GREG CARLOSS: After the expedition, Oxford was loaned out to aid the British Ornithological Institute for their research on Ascension Island. From there it was bought by a local and eventually fell into disrepair until it was found and restored in 2017.

GREG CARLOSS: Much of what you see is original to the truck, but in order to continue its journey, modifications were in order. And in 2019 Oxford made the return trip from Singapore back to London in what was dubbed “The Last Overland.” But Oxford doesn’t sit still for long.

DAVID SHORT: We worked a deal out and it came to America in January of 2020 and it’s been traveling around the United States ever since...Traveling around in Oxford is an experience...there’s no air conditioning. No power steering. No power brakes….It’s not like driving a cushy car like today but you really do feel like you’re part of the truck, part of the adventure. I think if you drive it, you’ll get it. 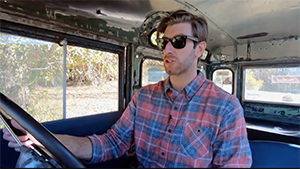 GREG CARLOSS: Ok we are firmly seated in here, there are what seems like millions of levers. Let’s try and get it in second gear, start off here, and let’s work our way away. There we go, alright...

Talk about being connected to the road, or lack thereof in this situation. You feel every single thing. You see me just bouncing around in here like crazy. I’m working the steering...I’m getting every bit of fume from the exhaust, but I’m loving every second of this. It’s incredible.

But I can’t imagine sitting in this thing for hours and hours on end, hitting bump after bump, climbing mountain after mountain. This thing is rough and tough and I love it.

With plans to keep trucking along from continent to continent, Oxford just may literally go everywhere and do everything.